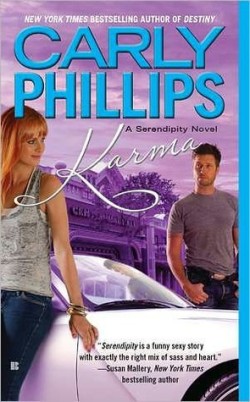 So it’s official, Dare is my favorite Barron brother.  He always seemed like the most carefree of the three and then in the last book we find out something a bit dark in his past that has haunted him and has influenced the man he’s become and the things he’s had to experience and endure.  Guilt for things he really had no control over has been eating at him.  And in a roundabout way, the girl that he’s always had a crush on is at the center of that.  That would be Liza McKnight.Liza has been enabling her alcoholic brother her whole life and he continues to be an irresponsible mess.  Dare has to struggle with his hatred for her brother and his disapproval of how she handles him.  But there are secrets in Liza’s past as well and reasons why she does what she does.

Dare is such a straight up guy, so strong and just one of those guys that when he is in the room he undoubtedly draws your attention.  A few years younger than her, this sexy cop might be just what she needs to finally let herself go.  Their relationship had to overcome some pretty hard obstacles and it didn’t happen overnight, but I liked that they didn’t fight their attraction because of those things.  They gave in to it and explored it.

Liza on the other hand is a very strong heroine and I have to respect her for that.  She’s had to make some tough decisions in her life, dealth with parents that were not the most stellar.  It’s hard for her to BE loved.  But once Dare is in, he doesn’t hold back in showing her what it’s like to not be alone.  Of course, minus one minor mishap in which I might’ve wanted to bash his head.

Another thing I love about Ms. Phillips books is the fact that we always see more of the rest of the family.  The two couples in the previous books are still very much a part of this story, as well as Tess.
I am definitely looking forward to seeing more about the characters from this town in the upcoming spin-off series.

This series is amazing. Can’t wait to read Karma. I’m off to pick it up now. Thanks for the great review.

Thanks for the great review! Grrr… I really need to catch up on this series!!!

So many books, so little time! Can’t wait for summer to start reading!

Can’t wait to read about all these Barron brothers!

I’ve read the other books just pending Karma and I can’t wait to read it. Love this series!

Great review Francesca…added this to my wishlist!

I’m not familiar with Carly’s work, but I love books with a strong heroine and it sounds like Liza fits the bill.

I haven’t read this series or anything by Carly Phillips before but after reading your review I’m definitely thinking about picking it up. First off, what is a cooler name than Dare?
It also seems like an awesome romance, and I love it when one character has liked the other for ages.

Nice review. I have been wanting to read this trilogy for a while now and reading this review makes it so much worse. It sounds like a great book and I cannot wait to get my hands on it.