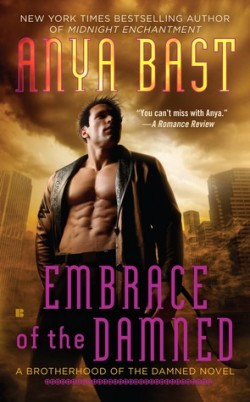 Embrace of the Damned
by Anya Bast

The premise of this series is very interesting.  There are some aspects that I found extremely original and can’t wait to see more of this world develop.  As the first book in the series there was a bit of explaining things but it wasn’t overwhelming to the point that it interfered with my enjoyment of the book.

“I want to fuck you, Jessa. I want a night of pure, down and dirty sex with you. I want to make you come over and over.” He took a shuddering, shaky breath. “I want to hear you scream my name at the top of your lungs. Now you know what I’m thinking about.”

So let me explain why he seems to be coming on a bit too strong.  Broder has been an immortal for a century and he has been part of the Brotherhood for that long.  They are warriors that pretty much belong to Loki, a temperamental God who made them all immortal because they had committed some pretty bad crimes.  Loki cursed Broder to not be able to have sex with anyone until the one woman that was for him came on the 1000 anniversary of his mortal death.  And the day has come and his “chastity belt” has come off.

Jessamine was in theory everything he could ever hope for to get as his mate.  Except that she got on my very last nerve!  Not so much her personality but her hot and cold attitude towards Broder.  She was just a bit TOO MUCH of a “cock-tease” to the point that I just wanted to slap her sometimes.  Either you want him now or you want to wait, but quit doing this to him!!

Broder has a secret in his past and it has to do with Jessamine too.  Now that he found her he will have to protect her.  See she is actually a sort of powerful witch who doesn’t know anything about her own powers.  Her true family wants her back, the bad guys want her out of the picture.  And she will have to trust Broder, a complete stranger, to protect her.

My favorite part of this world was the bad guys.  Some sort of blood drinkers that when killed shatter into shards of ice.  Hell is frozen not hot, ice not fire.  I thought that concept was very cool.  And the Brotherhood members are made immortal by having that ice embedded in their heart.  I’m intrigued to see what’s to come in the series.

Anya Bast is the author of numerous works of romantic fiction, mostly all paranormal and mostly all scorching hot. She lives in the country with her husband, daughter, eight cats, a dog, and an odd assortment of rescued animals.

She grew up in Minnesota and still favors the colder climates. After high school she moved to the southeast United States where she attended college. While in graduate school she sold her first book and decide to pursue her lifelong dream of writing instead of a career in psychology.

Somewhat reclusive by nature, she can be drawn out with a good bottle of red wine, classic movies, or good music. When she’s not writing, she can be found trying to grow organic vegetables, shopping in thrift stores for that perfect piece of clothing, or dreaming about travel to some faraway country.

She’s hard at work on a brand new series for Berkley Sensation right now, while winding up her national bestselling Elemental Witches quartet.

Ooh, this one sounds good! The whole concept is definitely intriguing!

This sounds like a wonderful start to a great new series!

Can’t wait to read it, it soooo sounds like a HOT read.

Promises to be a good series, hope you like it!