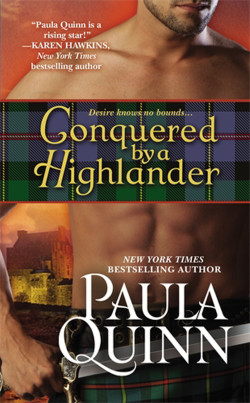 Conquered by a Highlander
by Paula Quinn

I want to start this review with quote which has nothing to do with my review of the story but touched my heart to the core.
A dedication:
To my beloved… Until we meet again in the sweet hereafter. I love you.

This is my first Quinn book and to be honest, I was surprised that I liked it. This fell into my lap to review but if you know me well, I would not start a series with book #4. I have this fear of missing out too much information. But Ms. Quinn did a fantastic job of making this a stand alone book. I was engrossed by the story without feeling like there’s something amiss.

Lady Gillian Dearly is no common Lady. In fact, she is no Lady at all, per every male in the 1600s. She is a single mother of a 3year old, Edmund. As an embarrassment to her father, she was sent to an almost banishment to live with her cousin in Dartmouth. Geoffrey Dearly, the Earl of Devon, had gladly taken her in and took responsibilities of keeping her hidden from the public eye. Which is not so bad but her cousin had always had a “thing” for her. But because the feelings are not mutual, he will do what he can to punish her and finally claim her legally. If it means using Edmund as advantage, he will stop at nothing.

Collin McGregor has come to Dartmouth to spy for King James. Rumor has it that the Earl of Devon is to host a coming together to replace the king. Colin will live as a Campbell to learn who is conspiring against the king. But how will he fair an undeniable attraction to the forbidden lady.

I enjoyed this highlander story. Though it had the typical highlander plot of betrayals, political battles, overtaking of lands etc, it never gets old with me. And this particular plot has surprises I did not see coming. I love the untypical status of Lady Gillian. Such a predicament is just not accepted and to still have a respectable Highlander fall for her was just a delight to see. The story does not take place over night but was enough time for Collin to earn trust from Geoffrey and most importantly trust from Gillian. They fell in love in ample amount of time and Collin falling for Edmund was very sweet. Several names mentioned are characters from the previous books of this series and I am very intrigued to learn how they reached their HEAs. I found out that all of them are on audiobook, which I’m very fond of. All are now on my wish list in audible.com.

Good review! I’m behind on reading this series and forgot to preorder this but I’m adding it to my Amazon list today. Thanks for sharing

I am with you, the plot may be tried and true but I still will never have enough highlander love. Nice review.