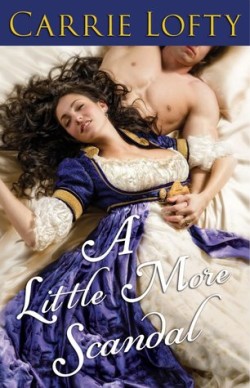 A LITTLE MORE SCANDAL is the story of the original Christies.  At the beginning of FLAWLESS, Sir William Christie had just died and left his kids with some tough choices to face if they wanted their inheritance.  This is his story.

William Christie is not a man of good family, he’s made his fortune on his own, coming from nothing.  After the death of his wife, whom he was married more for convenience and respect than love, he’s hardened even further.  Everything with him is a means to an end.  His end, his goals, his success.

Which is why he is challenged and at the same time attracted to Catrin Jones.  She is from a decent family, but poor.  The only survivor of a shipwreck.  Military nurse.  He wants to get her story so he can have control of a newspaper that is sure to go out of business and he wants to get his paws on it.  The key is the exclusive of what happened to that ship and the story of the lone survivor.  If he has to seduce her to get it, then so be it.

William Christie, the brute, the jerk, really I shouldn’t like him.  He is everything that you’d expect me NOT to like.  But I find myself captivated by his spirit, his drive, his passion.  And I can say the same for Catrin, she’s straightforward, she knows what she wants and isn’t afraid to go after it.  They’re perfectly matched.

It is bittersweet to see their story knowing they are no longer around, but now I really want to read Alex’s story, STARLIGHT.  He is the son from Sir William’s first marriage.

Thanks for the great review! Carrie’s at the top of my wishlist and I like that she put out a prequel 🙂

This story sounds so good…its gonna be hard to read knowing that they won’t be around…but I’m gonna try to not think about to much. Added to my tbr list!

Thanks for the review. I love it when an author gives the reader background info for their series!

I adored Flawless. I didn’t realize that she had a prequel out. Thanks for the heads up and review.

I started but didn’t finish, Flawless, but this review has me interested in the prequel.

Under the Covers Book Blog
Admin
Reply to  Monica V.

Hope you give it a shot. This was great and I loved the second book!