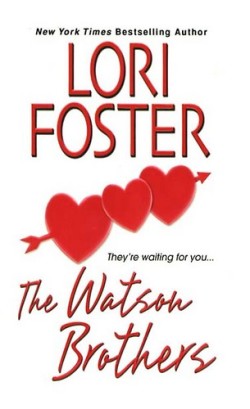 The Watson Brothers
by Lori Foster

“My House, My Rules”

Kicking off this book about the sexy Watson brothers is the oldest, Sam.  He’s had a crush on Ariel for a long time but has always told himself he’s too old for her.  His youngest brother Pete thought he was in love with her a few years back.  So Ariel has always been off limits.  Now in the middle of an investigation, because hot sexy Sam is a cop, she has decided she wants him and is going after him.  Other than some pretty sucky timing on her part, I just wanted to slap her around most of the time.  Ariel is young, and immature, and innocent.  And I don’t really think she knows what she wants.  She decides she wants to give her virginity to Sam but then is about to walk out the door when he asks her to strip?  Good thing Sam was hot enough to make up for my lack of like of the heroine.

Such a crazy situation to be in.  Gil Watson is the middle brother, the centered and stable brother.  The one running the family business.  The one who has his career in the right direction, has the nice big house, and everything where he wants.  Except for when he finds out that he has a daughter.  He has one night of passion with a work-related acquaintance in another state and apparently she got pregnant and didn’t say anything.  Now that she’s dead he is faced with having to raise his daughter.  But she comes with an extra person.  Anabel was actually the one who raised the girl until now since the mom didn’t really want to deal with her.  And she’s grown attached to the baby and will do ANYTHING to not be separated from her.  Anabel is not the usual type of woman Gil has envisioned himself with.  But he’s wanted her ever since he met her years ago.   These two actually had really good chemistry and they worked well as a couple for me.  Even though her proposition was CRAZY they made it work!

“Good With His Hands”

This was the story I originally read that introduced me to the Watson brothers. It was cute, funny, sexy and hot. There’s the girl next door, Cassidy, who’s a bit of a tomboy, doesn’t worry too much about how she dresses or what her hair looks like. She works with, and now lives next door to, hunky and to-die-for hot Pete Watson. They’ve been best friends for over a year, they have a great routine together, almost as if they’re married, but it’s not sexual between them. Until Pete decides that he wants it to be sexual. And of course, Cassidy had been drooling over him the whole time and torturing herself by being so close and not having him so she’s all for the idea of them together. Pete was just too cute. The guy just had no clue sometimes about things and it was adorable to see him wonder how his charms might not be working on Cassidy. She’s the girl with the plan of where her life is going and what kind of guy she wants to marry. And that guy is so not him. But maybe he can make the effort and be what he feels her ideal is. Or make her realize that she wants him instead as he is. Because he realizes he’s been falling for her this whole time.

Lori believes it is important to give back to the community as much as possible, so she routinely arranges events among authors and readers to gather donations for various organizations.