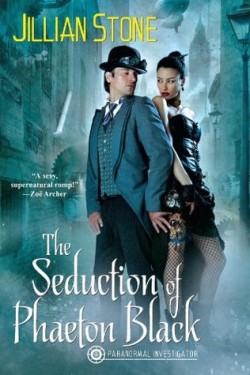 The Seduction of Phaeton Black
by Jillian Stone

Phaeton Black was ousted from Scotland Yard after the Jack the Ripper murders for his believe that the perpetrator was in fact not entirely of this world. But now bodies are turning up drained of blood and Scotland Yard are knocking on his door seeking his assistance. But Phaeton isn’t a normal detective, he is well known not only for his outlandish believes, but also for his appetite for women, whiskey and opium.

America Jones has just lost everything, her father, her shipping business and soon her life if the pirates chasing her get their hands on her. But America is a resourcefull woman and when the opportunity to flee arrives she takes it, using a passerby to unwillingly assist her. The passerby happens to be Phaeton Black, now their paths have crossed they are drawn to one another as danger closes in on both of them.

This book is a hard one to classify, part historical romance, part adventure story, part erotica and all with a supernatural twist to keep it that much more interesting. It is all set in Victorian London, which helped create a rather sinister and suspenseful atmosphere. Butu despite the many elements of the story I didn’t enjoy it as much as I hoped I would from reading the blurb.

But there were elements I did enjoy, the main characters Phaeton and America were interesting and I loved their relationship and watching it develop. I liked that America was a strong female character who wasn’t afraid to say what she wanted and Phaeton had all the appeal of a rake and a rogue, seductive, witty and the aura of a bad boy that a good girl like me couldn’t help but love. They were also hot. Very hot. This book was steamy and the sex scenes were some of my favourite parts!

The mystery however, although interesting I thought ended rather abruptly and strangely and was actually a bit anti climatic, I expected more. The story itself didn’t exactly grip me either, although I was interested, I found I was reading to see what was going to happen between Phaeton and America rather then what would happen next with the murders.

It was an enjoyable read though, it had well rounded characters and plenty of steam.

I have this on my TBR pile. I liked the cover and the blurb sounded good. Shame it didn’t hit the spot!

Thanks Suz for the heads up on this new series!

nice review, i cant wait to read this book 🙂