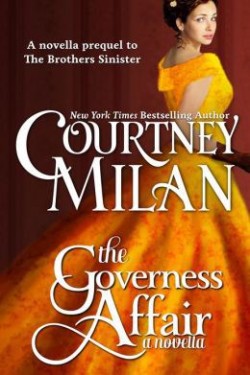 The Governess Affair
by Courtney Milan

Courtney Milan teases her readers with THE GOVERNESS AFFAIR, the prequel to her new Brother Sinister series. In this book, the hero is an ambitious man, known as the Wolf of Clermont. As a pugilist, he has a reputation of cleaning up the messes that the duke makes and in this book, Hugo Marshall must tidy up a night of regret and a ruined governess.

Pregnant and without a job, Serena Barton does whatever it will take to get her needs known to the man who tarnished her reputation. With a steel spine and a relentless attitude, Serena comes very close to getting what she wants. However, Hugo is also a man well acquainted with negotiating. As a bitter back-and-forth occurs between the two, the tone becomes less argumentative and more teasing.

Hugo and Serena cannot deny their attraction to one another. However, they cannot act upon it because there is the problem of taking care of Serena and her unborn babe. Milan does a great job of creating sexual tension and setting up an interesting storyline within the 100 pages of this novella. I was quite impressed by the way she was able to unravel these two opposing characters that were hellbent on getting rid of each other to instead, fall deeply in love.

With the interesting use of pins in a love scene, I have to say that Milan certainly comes up with unique ways to easing a character’s worries in the bedroom.

If this novella is any indication of what the rest of the series will be like, then readers are in for a treat!

I loved this book too, Mandi!