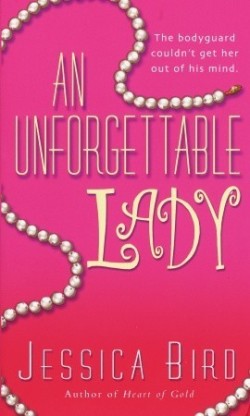 An Unforgettable Lady
by Jessica Bird

As a fanatic – almost rabid- fan of the Black Dagger Brotherhood series, I cannot help but gush over J.R. Ward writing. So, in the effort to cover my bases a little more, I decided to pick AN UNFORGETTABLE LADY off my bookshelf and read it. I was pleasantly surprised because I thought that this was a strictly contemporary romance, but I soon found out that it’s a romantic suspense.

Bird captured my attention with the first sizzling hot kiss between the hero and heroine of this book. Grace Hall is a countess. She’s wealthy, privileged and scared out of her wits because members of society are now being killed off one by one. In addition to that, she had the added stress of maintaining her father’s fortune after his recent death while also dealing with the repercussions of her ongoing divorce.

When she first meets John Smith, their meeting is a heated one but in not the way you think. They bicker with one another, neither one allowing the other to gain the upper hand. Smith is a man of little words. He is a man who is content with who he is and isn’t looking for change. His life may be lonely, but at least he has control over it and so when Grace learns of another murder, she hires Smith as a personal bodyguard to ease her nerves a bit. It’s Grace’s effort to gain control of her own life.

As their lives collide, Grace soon finds herself unable to deny the attraction that she has for Smith. Similarly, Smith can’t help but notice that Grace isn’t an ice princess that society portrays her to be. He learns that she has a fire in her.

Bird does an excellent job of transitioning from feelings of extreme fear to lust, reaching the opposite end of the emotional spectrum that a character can feel. What I loved about this book is that the in-depth thought processes of a character that readers enjoy from the BDB books are still evident in Bird’s writing. She writes in a way that you feel as if you are Smith, as he battles between his sense of honor and duty and his lust for Grace.

In the note to readers at the beginning of this book, Bird mentions that she sees Grace and Smith similar to Marissa and Butch because Grace is wealth and class while Smith could not be any more different than her. I do see the resemblance, but I feel like their personalities are more similar to Z and Bella. Much like Z, Smith warns Grace off, telling her that he is a man one night stands, not of lazy morning-afters. But like Bella, Grace doesn’t allow him to push her away. She is determined, and in the end, she gets what she wants.

AN UNFORGETTABLE LADY turned out to be an enjoyable read that I would recommend to readers who enjoy romantic suspense. It has the same elements of our favorite books by Ward, but just a different backdrop and a little more emphasis on suspense. But in the end, the product is the same. It’s gold.

Hope you enjoy this, Timitra!

Braine, I read your comment in the email notification, but for some reason its not showing up here. We didn’t delete it, it’s just gone. Sorry about that!

Great review Ann! I really enjoyed this one too! The second book in the series “An Irresistible Bachelor” is really good too. In fact, I think I ended up liking that one a little bit more 🙂 I’m a big fan of the BDB, but these are still very enjoyable reads. Are you planning on reading the second book?

With 4 toe curling ratings. How can I resist? Sounds sexy. Good review! Hope I like it too!
! War God said hi! Oh and tell LV hi for me! <3 lmao

Hi Amber! Thanks so much! I have it on my TBR but am not sure when I’ll be able to get to it. It’s great to hear that you enjoyed that one more, gives me high hopes cuz I enjoyed this one a lot!

Miz Vain, how are you my sweetheart? Say hi to my lovers for me 😛

I love romantic suspense and have been putting this off. I am going to have to try it =)