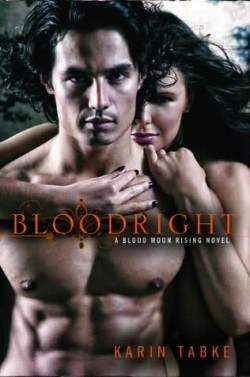 BLOODRIGHT continues off where BLOOD LAW ended. Falon now belongs to the dark and dangerous alpha of the Mondragon clan, Lucien, her former lover’s brother. Things are a complete mess in the beginning. Falon wants nothing to do with Luca and at every turn, she makes it known that her heart lies with his brother and not with Luca. Feeling as if his pride has been tackled by a raging bull, Luca doesn’t take this rejection lightly. He’s an alpha and he also makes that known to Falon. There is no way he is backing down. She belongs to him now. And that is that.

However, Falon is also an alpha and she doesn’t yield when Luca demands her submission. What I liked about Falon in the first book and later on in this book was the fact that despite standing between two alpha men, she isn’t overshadowed by their hard personalities. She definitely holds her own and in turn, gains the respect of both the Vulkusin and Mondragon packs.

I have mixed feelings about this book because though it holds the same passion and the same intensity as the first book, I thought there were a lot of rough patches between Falon and Luca. Readers have already fallen in love with Rafa in the last book, so I was eager to see how Tabke would accomplish the hard task of making Falon love Luca just as much as Rafa in this book. At first, I didn’t feel it. Luca is the exact opposite of Rafa. Where Rafa is honor and light, Luca is torment and darkness. Luca believes that Rafa, his brother, his own blood betrayed him when he stole the life of his chosen one, Mara all those years ago. It’s why the bloodright works now because an eye for an eye means that Luca now has the power to take, or kill Rafa’s chosen one. Instead, he takes his brother’s lover, Falon into his bed.

The first sex between Falon and Luca is a hard one to read. Full of anger and without love, it made me pause because I can’t say I enjoyed it. I have no problem with rough sex, but this wasn’t about that. This was about Luca removing Rafa’s claim on Falon’s body and marking her as his own.

Action like you’ve never seen before happens in the latter half of this book. Tabke really kicks things up, ending at a great time that will make readers want to know what happens next. Overall, BLOODRIGHT was another great read by Karin Tabke. I could just do without the wolf smexing next time. 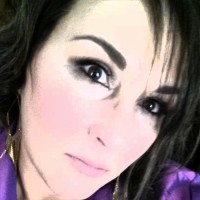 For a long time, controlled chaos ruled Karin’s life. Busy mother of four, owner of her own successful business and wife to a street cop, she harbored thoughts of twisting plots and hot romantic scenes. Now, with only one child left at home and hubby retired from law enforcement, Karin happily pounds out those steamy scenes at her keyboard.

Still semi-distracted by her adult children (Yay! no more phone calls from the high school!) and her husband now a successful football coach (Yay! No more worrying when he’s out on the street!), Karin turns out stories about hot cops, bold knights, bad boy werewolves, and the women who bring them to their knees.

A full-time writer, Karin draws on a lifetime of stories and backdrops that few outside of the law enforcement community ever see, let alone hear about. Controlled chaos now reins supreme through the pages she writes where hot heroes serve, protect, and pleasure from page one to The End.

I recently got this book in the mail and was really excited to read it. I loved the first book. But I’ve read a couple other reviews about the wolf “smexing” and one reviewer didn’t make it past the first 40 pages because of the “other” scene. It’s making hard for me to jump into reading this book. I really think I may skip over those wolf scenes because it really isn’t something I want to read about. But I will give this book a try and see how I feel about the rest of it. I’m glad to see… Read more »

This book is an intense emotional roller coaster!! I love these characters :0)Amber, I read that review too (the one who couldn’t get past the first 40 pgs) and to be honest, I never take those kind of reviews into account. In my opinion, its unprofessional to “review” a book you haven’t even read, and more importantly – many times I’ve started a book and had “issues” with aspects of it, but by the time I’m finished the author has worked out those issues and I’ve usually ended up feeling completely different. It’s all about character motivations, etc – and… Read more »

@Authors Helping Harry I agree agree with you about those kind of reviews 🙂 It was mostly the other one I read about the later scenes that bothered me. I will still read this book, but not sure I’m going to read those paticular scenes.

They are definitely scenes that may make some people uncomfortable. After the shock wore off (LOL) I realized that although I was uncomfortable, in one sense, with some of it – at the same time, Karin is so talented that I wasn’t offended. It just felt “right” for the characters. I know some have termed it “bestiality”, but it is absolutely not in the context of this book, and these characters.I can understand wanting to skip certain scenes ;0) I think you’ll be very pleasantly surprised by this book – especially if you are a Karin Tabke fan. I cannot… Read more »

Ann you have me intrigued by the wolf smexin…I’m definitely giving this one a try!!!

Hi Amber! I would definitely say to give this book a chance. Everyone has different preferences and I always say its better to form your own opinion if you arent sure.

Authors Helping Harry, this book definitely is a roller coaster ride! That ending!

Timitra! Let me know what you think! 😛

@Ann @Authors Helping Harry Thank you to both of you for your comments 🙂 I will definitely read it and at least now I won’t be shocked when I get to those parts! Lol! 🙂 🙂