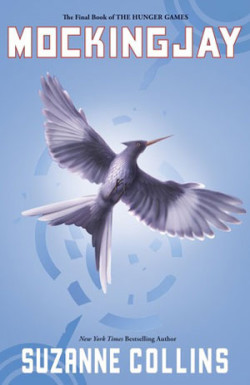 This is the last book in the Hunger Games trilogy, we finished Catching Fire with the realization that District 12, Katniss’s home, had been completely destroyed and Peeta captured by the Capitol and Katniss is now welcomed into the once thought annihilated District 13. The third and final book in this emotional and action packed series shows us Katniss becoming the Mockingjay, the symbol of the rebels and their freedom from the oppression of the Capitol. And once again Katniss finds herself used a pawn in a new and different kind of Game orchestrated by District 13 and their President as they use her to further their own ends.

All I can say is WOW! this book had me so twisted up, I couldn’t put it down, I literally sat and read it from end to end in one sitting, more often than not with tears dripping down my face. It was so emotional as you watch events unfold and Katniss breaking apart and all the characters fall…this book has a high body count and is not for the faint of heart.

As for Peeta vs Gale argument, I thought it was rather moot at the end, everyone had changed so much that it was the last thing I was thinking about. What I liked about this book was that it really showed the characters growing and maturing becoming adults as they are faced with horrific situations and became shaped by them. It made them very real showing both their flaws and their strengths.

This whole trilogy has been brilliant, definitely among the best books I have read, all three have kept a steady pace of action and character and plot development. It has kept me wanting more and kept me emotionally engaged (or strung out!) in all three; I believe I have shed tears whilst reading all three books! The storyline is both high on entertainment with the fast paced action and thought provoking, this isn’t a mindless action book about the People vs the Evil State.

And this book did get me thinking. Were District 13 and President Coin any better than the Capitol and President Snow? They were both ruthless in their goals, using any means necessary to achieve it; they both used Katniss, in the end they both wanted to destroy her. And there was a part at the end that led me to believe that they probably weren’t, just different sides to the same coin (no pun intended!). I think what struck me was the thought that in the end war leaves no one unscathed, especially the victors, and Katniss and Peeta seemed to be a perfect example of this. They both had scars that will never heal inwardly and outwardly and people they will never get back; in the end it seemed like a rather pyrrhic victory to me. But then again I didn’t go into this book expecting a happy ending.

Finally a positive review for this book. I had to wait for its release and all the reviews I read about it weren’t that great. I have put it off and still haven’t read it. Thanks for a great review. I’ll add to current stack of reads. Thanks!

Great review! This is why I haven’t gotten around to reading this book even though I read the first two well over a year ago.

I still can’t figure out who was the true bad guy. I’ll have to read all three again and decide 😀

Have not read this author or this series, yet. I have added to my to buy list. Enjoyed the review.