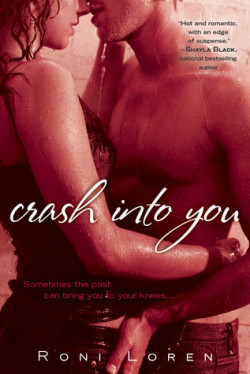 Crash Into You
by Roni Loren

Where do I start!??!  Maybe the hot cover?  No that’s a given.  I should mention though that when I saw this book had quotes from some of my favorite authors (ie Shayla Black, Lorelei James and Jo Davis) I knew it had to be awesome.  I mean, those ladies write amazing books, so if they something is that good then it has to be, right??
Well, this book delivered!  Roni Loren can definitely write a great story with characters I cared for and was rooting for.  Lets start with the fact that they were lovers in the past.  They were in love and people got in the way of their happiness then.  Fast forward ten years and their lives collide again and they have to help each other.  The passion and the feelings all come rushing back.
I loved the “Then” and “Now” parts of the book.  I love books that do that because it slowly builds up their present while you learn in small doses about what happened to them before.  And what a story these two had.
First of all, rich boy, now lawyer, Reid Jamison is hot as sin!  He also has skeletons in his closet, being the son of a rapist and a sadist.  He had to fight with his desires for a BDSM relationship while trying not to become his father.  Brynn was the girl to give him everything he wanted.  He loved her, body, mind and soul.  Until she left him, for reasons that we know find out.
Brynn also comes from a terrible background, her mother being an “easy” woman and that was a reputation she had to fight against while then raising her sister by herself.  Being with Reid the way he wanted made her feel a bit like walking in her mothers’ shoes, but it wasn’t like that between them.  Just maybe what others saw.  And then came that one night that ruined their lives for years to come.
Now her sister ends up at a BDSM couples retreat getaway as a training submissive and Brynn has to go rescue her.  Having to infiltrate that world again and having to submit to a stranger.  Except that Reid has no plans of letting her do this alone and goes in as her Dom.
This book is hot but also emotional, with a great storyline!  I can’t wait to read the next one!!

HI,
I LOVE LOVE LOVE this book. I had not read any of her books prior to this one. After reading it, she definitely has a fan in me. I can’t wait for the next one to be released!!
Mariann @ Belle’s Book Bag

Great review! Haven’t heard of this author either. I love finding new authors.

This sounds really good…adding to my wishlist!

Thanks! Yes, I loved it and I can’t wait for the next, there’s a novella coming out soon.

I am so glad to see it get a good review from you. I’ve had it on my wish list since I heard about it and thought it sounded great.

ARC Review: Not Until You by Roni Loren | Under the Covers Book Blog

Interview and Giveaway with Roni Loren | Under the Covers Book Blog