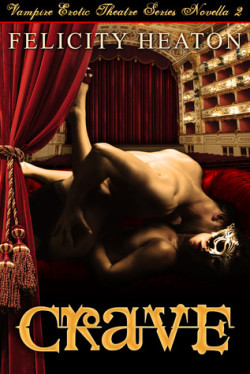 Ms. Heaton has delivered another scorching hot novel for us to enjoy. This book can be compared to 9 ½ Weeks and Indecent Proposal combined with Erotic PNR. It truly exceeded my expectations and as the title of the book, it made me CRAVE for more.Callum is another vampire who co-owns Vampirerotique with four other vampires. He is searching for new talent for a new show. Instead, he finds the experience of a lifetime that leads him to get his HEA. Oddest thing is he finds it in the most unexpected place and species. In a bar and a female wolfe. Callum was not what I expected at all, I always saw him as this reserved very quiet vamp but just not in the bedroom. This guy can rock one’s world and take note my favorite place “behind the curtains”. (You will see what I mean).

Kristina, a Wolfe on the run from her pack leader in avoidance of the Neanderthal act of claiming her to bear his pup. She is “…a vixen, a real predator as she glanced over every man, even those with partners…” and a very liberated wolfe who won’t have it. So she swore off any contact with her pack and has been on the run since then.

Callum and Kristina meet and instant attraction hits them. An odd pairing as they belong to two different worlds, a forbidden lust and cravings they cannot ignore. Callum offers her to stay with him for a week to get to know each other, and get-to-know-each-other they did! It was a very hot week until Kristina goes missing. I do not want to give too much information but there will be a fight, confrontations, rescuing, we will see other characters and more will be introduced.

It is a pleasure to see a different light of Antoine. Seems like there is more to him then meets the eye, definitely something to do with family issues (my guess). We also see a bit of my love, Snow. I have this thing for him you see, had even attempted to catch his attention through social media. Although, he did not answer I am sure he had taken notice. #inmydreams *cough*. Anyway, we see more of Snow, his temper, dangerous side and another bit of his humanity, which is rare for a pureblood such as him. Both Antoine and Snow’s book will be just as amazing as this one, no doubt.

*Standing ovation from me to Ms. Heaton* Job well done yet again!!!

Oh yes, I love Felicity’s books and look forward to each of these.

Thanks for sharing the review!

Ooooh this sounds really good…adding to my wishlist!!!!

Thanks Angela! I’m glad to see that you enjoyed this one as much as the first one, and you’re still hankering after another Snow fix. Soon! Seduce is next and that’s Antoine’s story. You’ll get a fantastic Snow fix in that one. Promise!

How can I not? Snow is just soooo raw, soooo primal! =D
Although, Antoine has a similar qualities just a little uptight.LOL
Thanks for passing by to read my review. Mush appreciated.
~Angela @ UTC