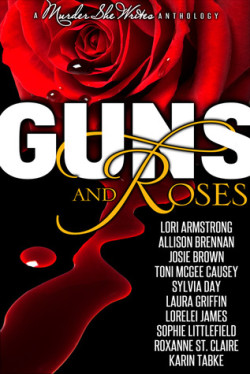 Let me start out by saying that I have not read less than half of the authors in this anthology before picking this up, so I was very excited to get to sample some new authors!  This anthology is more on the mystery side than the romantic suspense, even though there is a romantic undertone to all the stories.  Just don’t go in expecting a lot of hot and heavy action.  I’m giving the anthology in general a rating of 3 stars but there were some stories that stood out, which make this anthology 100% worthwhile.  So lets break it down.

The story was cute.  I see it’s part of the Bullet Catchers series, which is a security firm basically.  They are hired to serve as bodyguards to a politician but then get fired when they actually do their job on what seems to be a false alarm.  Benjamin Youngblood is the agent that had followed a hunch and lost the client so he gets fired.  In order to get his job back he wants to prove that he was right and keeps digging into the case.  Then he stumbles across Callie Parrish and the pieces start to fall into place, now all he has to do is get the proof.  This was pretty good until the ending then it got a little silly.  But still very entertaining read.

This story was extremely short.  When it comes to stories that short is really hard to form an opinion on how good they are, especially when you don’t already know the characters from somewhere else.    Basically Holly is at the wrong place, at the wrong time, with the wrong vehicle.  She is mistaken for a drug trafficking player and crashes her van loaded with flowers that she was supposed to deliver for a wedding.  Now she’s in the middle of an investigation and she doesn’t even know it.  I had a few eye-rolling moments with this story, especially when she gets rescued by a perfect stranger and when he leaves her alone at his house, she thinks its ok for her to “borrow” his car to make her flower delivery.

Above Reproach by Allison Brennan – 3.5 Stars

Now this story I liked a lot better.  There’s a lot less romance and it’s a grittier story.  Not all the fluff and humor.  A serial rapist is escalating his game and has now killed his first victim.  Selena Black is the detective that has been after this guy for a while and she KNOWS who it is.  Except he’s a highly respected member of the community.  She makes mistakes that can cost them the investigation and her past comes poking its little ugly head as well.  But all I could think of after I finished this story was that I wouldn’t mind reading more about her and her surgeon boyfriend, Gabriel, because he seems dangerous and dirty, and I would love to know what happens next!

I am kicking myself in the butt right now for not starting to read the Julie Collins series sooner.  I have no clue where this short story falls in the timeline but I can say that Julie is my kind of heroine.  Kick ass and headstrong.  I mean, she starts off the story by describing how much she hates Valentine’s Day, she can drink and she even watches Myth Busters!  I gotta know more about this PI!  She’s struggling with following up on a couple of PI cases where she’s dealing with cheaters and drawing comparisons with her own relationship, and thinking her boyfriend is cheating on her.  I kept going back and forth between wanting him to be found guilty so she could get it on with her PI partner, or wanting it all to have a sweet ending.  And I won’t tell you which way it goes.  I will be reading the rest of her books hopefully soon because I love Julie!

This was the hottest story of the bunch, and even though it wasn’t very long I think the story was developed very well.  Anastasia goes back to her hometown following up on a lead for her job as an insurance investigator.  See, some major jewels were stolen and she knows her mother was the mastermind behind the heist.  Of course being back in town somehow translated into being back in Jake Monroe’s bed.  He’s a cop, she comes from a family of thieves.  Even though she mostly tries to do good, sometimes she lets things go.  And this is why she thought they could never work as a couple.  Jake though has no plans of letting her walk out of his life again.

I started out this story thinking I would love it.  I have read this author before, in this genre, as short stories, and loved them all.  This one fell a bit flat though.  There’s been a murder at a frat house party and Detective Cash Cantrell is called in to investigate.  The murder is very similar to a case years ago.  He only has the victim’s friend to help in the investigation.  And he’s attracted to her.  Not only there’s an age difference, but he’s black and she’s white.  As much as he wants to fight what’s going on between them she is helping with the investigation.  The mystery or suspense was ok but the rest fizzled out for me.

Going back to college stories, there’s a dead body, male in an all female dorm.  Joe Bashir is going back as a detective in the case after having dropped out of this same college a while back.  I was scared there would be another cop-college girl romantic interest in this book so I was happy to see it wasn’t.  While Joe is investigating, his knowledge of school rituals from before comes into play, even though he was originally called in due to his heritage and language skills.  Muslim hate crimes rendered Joe’s dad pretty much an invalid, affected his own life and now have again shown up in this case.  The romance in this story doesn’t even come into play until the end of the story but it was a nice addition.

The Housewife Assassin’s Bloody Valentine by Josie Brown – No Rating

I couldn’t get into this story and stopped about halfway through.

This is a Rough Riders short story. A bad day in the life of Cam McKay as a cop.  He’s called in to the scene of a murder/suicide on Valentine’s Day.  He went to school with the husband.  They seemed like such a happy couple just days before.  Cam has to deal with the parents, the investigation, and the fact that the reason why this all might’ve happened is because the husband never recovered mentally after coming back from war.  A lot of the issues hit home for Cam.  But at the end of the day when he gets to go home, the love of his family pulls him through.

I can just let that title speak for itself! LOL This story was funny and a bit whacky but it was enjoyable if you like your heroines a bit eccentric, who can’t go anywhere without a gun, even their own wedding, and who almost everyone is scared of.

Anthologies are a great way to read new authors. This looks like a great book to try. Thanks for the review.