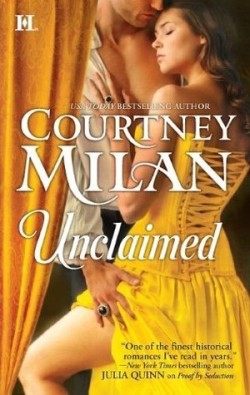 This is such a hard book to review, especially because it has some elements that I normally don’t care for much, but somehow they work so well in this book!Sir Mark Turner was left writing a book about chastity when we finished Unveiled. Yes, the hero is a virgin *cue the shocked gasps*. This is not usually the case, but for Mark waiting until marriage is very important and he wants to teach these values to other people. If you had asked me what I thought at the end of the last book, I would’ve said I didn’t understand his point much. After reading what he had to go through as a child, maybe I see it in a new light.

The story was definitely eye opening in regards to the Turner brothers and all they’ve had to go through. It has not been an easy life for any of them.

Now that Mark is somewhat of a celebrity he will be faced with the biggest challenge yet. Jessica. While he believes she’s a reputable woman and starts falling in love with her, she is actually hiding a secret with the sole purpose of destroying him. And she’s the experienced one in this story.

This series has brought the heroines so far in somewhat of a bad light. They always have a big obstacle to overcome to achieve their HEA. Betrayal. And the hurt and deception that goes along with it. I think that’s the best part about these stories. Seeing the heroines dig themselves out of really tough situations.

Now you’re just left to find out if Mark will give in to his needs and throw everything he’s achieved out the window for one moment of bliss in Jessica’s arms. Totally worth it!

We’ll have to see what Smite’s story will bring, somehow I have a feeling his will be a tearjerker.

Love the honest review! I also love when a book has elements I don’t normally care for in it and the author makes it work for me =)

I have read 2 of Courtney’s books and enjoyed them both. I would love to enter the contest but there was no entry form in the email that was sent to me. Does commenting on the blog count as an entry?
mcv111 at hotmail(dot)com

I have read 2 of Courtney’s books and enjoyed them both. I would love to enter the contest but there was no entry form in the email that was sent to me. Does commenting on the blog count as an entry?
mcv111 at hotmail(dot)com

Sounds like a good story. Interesting that the hero is the virgin in this book. Enjoyed the review.

I’ve never read a story where the hero is virgin, for this reason I’m adding it to my wishlist!

This looks like it would be a great read. Will have to add to my must buy pile and check out this book and series. This is also a new author and always looking for new authors to read.
christinebails@yahoo.com

I have a horribly messy desk too and do not mind working at it but it is not pretty.

Sounds like the kind of story I enjoy – and a series makes it even more fun!