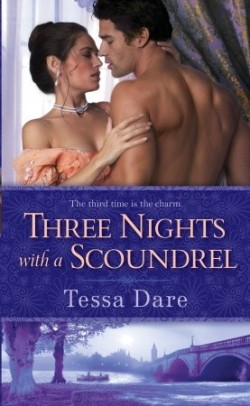 Three Nights with a Scoundrel
by Tessa Dare

The final installment of the Stud Club series is about the remaining bachelor of the Stud Club, Julian Belllamy and the Lady Lily. Right from the first book you can see that Julian is madly in love with his murdered friend’s deaf twin sister, the only person who doesn’t seem to realize is Lily herself. But, as Julian gets more obsessed with finding Leo’s murderers believing that they were really after him because of his very shady past, Lily gets worried for his health and makes him promise her three nights with him where he can help her in society to find a husband.I have enjoyed this series greatly, each book has given a great couple with completely different characters, I don’t think this will ever be my favourite series but I definately liked it. And, I am glad that at last I have read Julian and Liliy’s book! You know from the other two books that Julian loves Lily, and so I was pleased to see them get their HEA.

Julian, I think, would go under the tortured hero catergory, after living his childhood in the gutter and then his adulthood trying to wreak revenge on the aristocracy he doesn’t feel worthy of Lily. I have to say that annoyed me a little, the whole unworthy thing, I am glad that Lily was having none of it. In fact I believe Julian was my least favourite hero in this series, for some reason he didn’t capture me like Spencer and Rhys did. However, Lily, I did like she adventurous and wasn’t afraid to go after Julian when she realized she loved him.

What I liked most about this book was the final discovery over who the Leo’s murderer was and why he was killed! This part of the story has kept me guessing all the way through! And I didn’t know the answer right up until it was revealed, which was fantastic, I love that it kept me guessing. I also liked the whys of his killing, I don’t want to spoil it if you haven’t read it, but I thought what happened was the best explanation.

I enjoyed this book and this trilogy and I will definitely be looking out for more books by Tessa Dare. 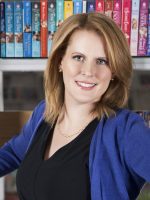 haven’t heard of this series but i am going to check it out. i am really into historicals lately and this one sounds fun. thanks for the review!

Haven’t read this series yet. Enjoyed your review. Will be checking out this series.

I’m gonna check out this series.