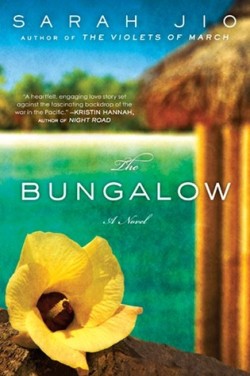 The Bungalow
by Sarah Jio

Isn’t it frightening to think that in the blink of an eye, your life can change so drastically? All it takes is for you to walk through door number two instead of door number one. The decisions you make in that moment can define the rest of your days.

I looked deep into his eyes. “It’s why I need to go,” I
said. “I need to find out.” He looked away. My words had hurt him, and I hated
that.  His left arm, the band one, hung
from his torso, limp, lifeless. He didn’t like wearing a sling when he went
out. “Anne,” he said, clearing his throat. His voice faltered a little, and her
paused to regain his strength. Gerard never cried. “If this is what it takes.
If there’s a chance I can have your whole heart again, I will wait.”

A love that never dies. For nearly seventy years, two halves of a whole were separated by a gruesome murder and a jealous friend.

The year is 1942 and Anne is about to marry Gerard in a marriage that was planned since they were children. Right before the marriage,
Maxine, the family housekeeper, tells Anne in so many words that a life without love is no life at all…she would know. Anne insists that she loves Gerard, that she’s always wanted to marry him. Yet, deep down she feels something could possibly be missing….

During her engagement party, her best friend, Kitty, is a no show until the last few minutes. Kitty and Anne have been friends since childhood. She shows up apologizing to Anne saying that she’s going off to Bora-Bora where they are in need of Army Nurses for the war. Kitty feels Anne and Gerard are not meant to be and has told Anne a few times before; Anne, naturally, disagrees. With the words in the back of her mind of what Maxine said, she decides to join Kitty to Bora-Bora. They will only be there for one year. Surely Gerard will understand and wait for her.

Once on the Island, Kitty immediately takes to a few of the service men. Naturally, the men flock to Kitty. She is stunning, a real beauty. Anne manages to catch the eye of one man in particular, Westry Green. She thinks nothing of it because Gerard has her heart….so she keeps telling herself. In the mean time,  after a few months on the island, Kitty starts to change and not confide in Anne anymore. Anne notices that Kitty isn’t opening up to her, yet Anne won’t push her. But when Kitty finally does, it’s a shock to Anne.

While out with friends one day, Anne stumbles along this little hidden run-down bungalow along the beach. She opens the door to find none other than Westry Green inside. They hit it off immediately and a beautiful relationship starts to unfold. They both decide the little bungalow will be their secret and they’ll fix it up. It will be their hideaway when they are in need of quiet time….a break from the war around them. Inevitably, they both fall wholly and madly in love with each other. And how beautiful it was!

Unfortunately, a horrible tragedy strikes the beautiful lush island and must be kept secret. At the same time, Westry is being shipped off to another war with no idea when he’ll return and Anne is set to go home. Right when Anne is about to board the ship, she confronts Westry on flowers she saw Kitty with the day before. Anne is heart stricken over the fact that Westry gave Kitty the flowers.  How could Westry give Kitty flowers from their bungalow where so many wonderful memories were shared?

Seventy years later, a journalist is trying to uncover the tragic murder that happened on the island. I hoped and prayed their bungalow would still be around. What happens in this part of the story is so breathtakingly sweet until….well, until the very end. There were tears streaming down my cheeks while I was reading it. This is a spellbinding story of a love so strong you’ll be wishing it was you.

This has to be one of the best romantic novels I have ever read. If you’re looking for actual romance scenes in this book, you won’t find them. And you know what? They’re not needed one bit because the author does a sensational job with the story. This book had me glued from the first few pages in and I loved every single minute of it! The author did a excellent job with creating and describing the story. I really felt like I was part of it all, there, seeing it unfold before me. I liked the secretive ways behind Kitty, Anne’s best friend. I was so curious to know what she was up to. I didn’t trust her one bit and in the end, I despised Kitty for what she did. There are secrets and surprises and just when you think you know what will happen, you are forced to think again.

I’m finding it hard to express the love I have for this novel. I’ve never said this before, but I truly feel this is a masterpiece. I read it in one day, staying up until 3 in the morning, because I was so captivated by it. You will fall head over heals in love with the characters and story that take place on this pacific island. It was a love that was meant to be, but was sadly cut short for so many years. My heart ached for the love these two shared but never could continue to have. Just thinking about it brings tears to my eyes again. They both still went on with their lives but were never able to forget what they shared.  Yes, they loved again, but never gave their hearts fully to anyone else but each other. It was a love so profound that it makes it hard for me to write about.  It’s scary how your life can change in a matter of minutes and it will never ever be the same.

The only thing that really bothered me about this book was that Westry and Anne were separated for so long. Being apart for seventy years put them both in their nineties when they were reunited. It just wasn’t fair! They should have had more time together! They shared one year together on the island. How many more will they have now that it’s seventy years later? I seem to forget that this is a work of fiction. But the author managed to evoked so many emotions out of me that I wanted it to be real in a way, that they will live on together for a very long time.  Ahh, this is what a great book does to me!

After reading this book on my kindle, I’ve decided that I absolutely have to have it on my bookshelf.  So I will be buying it in paperback soon. This book is a keeper! Just thinking about it makes me want to pick it up and read it again. You can bet I will be recommending it to every person I can. This book took up a place in my heart and rightfully so. I will be rereading this book for many years to come. I noticed that the author is still relatively new and has only one other book out. I can honestly say that I don’t care what it’s about, only that I need to get my hands on it asap.

A favorite line of mine-

“I watched as the island grew smaller, until it appeared a mere dot on a map. A dot where so much had happened, and so much had been left
behind.”

UTC would like to thank Taryn for reviewing this book for us!
Visit her blog at My Secret Romance Books for more of her reviews. 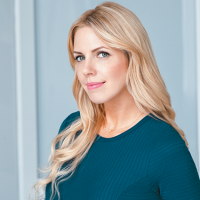 Sarah Jio is the international, USA Today and New York Times bestselling author of THE VIOLETS OF MARCH (a Library Journal Best Book of 2011 and a USA Today bestseller), THE BUNGALOW, BLACKBERRY WINTER (an instant New York Times and USA Today bestseller, as well as an international bestseller), THE LAST CAMELLIA (a Kirkus Books Most Anticipated Book of 2012), MORNING GLORY, GOODNIGHT JUNE, and THE LOOK OF LOVE (an iTunes Best Book of November 2014)—all from Penguin (Plume). Her new novel, ALWAYS, will debut in hardcover from Random House (Ballantine) on February 7, 2017. To date, Sarah’s novels are published in more than 25 countries, including Italy, France, Brazil, Turkey, Slovenia, Russia, China, Norway, Germany, Lithuania, Poland, Spain, and many others. Her novels have become major bestsellers in countries such as Turkey, Norway, Poland and Russia. Most recently, her new novel in Turkey, BACK TO YOU, became a #1 bestseller.

This looks like a very interesting book. I will be adding it to my MOUNT TBR =)

The way you are expressing yourself reminds me of my feelings after reading a handful of books that stayed with me. I had never heard of this one.

I have not read this author. This sounds like a really good love story. Have added to my wish list. Thank you for the review.

Taryn great review I’m definitely adding this to my wishlist!!!

Thanks for letting me review this book, Francesca. As you can see, I loved it!