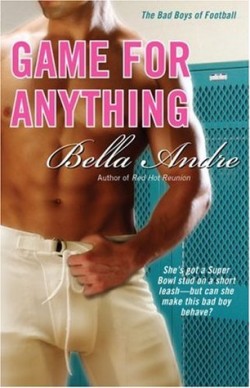 Game for Anything
by Bella Andre

I kind of have a soft spot for sports romance lately.  Maybe I’ve been in that kind of mood, but this book has been in my TBR pile for a long time and I finally decided to pick it up.  This being my first book by Ms. Andre I was more than pleasantly surprised.  The story is cute, sweet and sexy.  With a hero to die for and a heroine who I didn’t want to kill (most of the time).

Ty was the jock all through high school, dating all the beautiful girls and getting noticed for his athletic abilities.  He also had major issues to overcome being that he didn’t come from the best family, nor did he come from money.  He always felt less than others in that respect so a successful sports career has given him the chance to better himself and he’s taken it to an excess.

But before the lights and the money he had one night with the smartest girl in his class.  At senior prom he gets the guts to approach a girl who wasn’t the popular girl, but he always felt he didn’t deserve.  Julie had the hots for him.  And that one night led to him taking her virginity.  Except it all went wrong the morning after and they haven’t spoken or seen each other since.

Fast forward ten years, he is a successful quarterback in his prime but with a really bad reputation that needs cleaning up.  Julie has made a very successful career as an image consultant.  She is called in as the best person to fix Ty’s image.  And from that first meeting sparks are flying!

I had a small problem with Julie always jumping to conclusions.  She always thought the worst of Ty without giving him the opportunity to explain.  From that first night after senior prom and the same now.  She’s always thinking she knows what Ty feels and wants.

I enjoyed the writing style a lot, the bit of humor and sweetness in the book, and of course the hot athlete.  So I’ll be jumping into book two very soon!

I have seen this author’s name several times recently. Good reviews on all books. This one looks interesting to me because of its possible similarity to Susan Elizabeth Phillips sports series. Definitely adding to my TBR. Thanks for a great review 🙂

I haven’t read Susan Elizabeth Phillips, but it did have a similarity to Jaci Burton’s Play by Play, which is why I picked it up to deal with my withdrawal issues! LOL

Francesca you really have to try Susan Elizabeth Phillips’ Chicago Stars series. They are very good. I have read Bella Andre’s books and really enjoyed them. This one is on my to buy list. Enjoyed the review.

This has also been on my tbr pile for awhile as well…I’m dfeinitely reading this series this year!