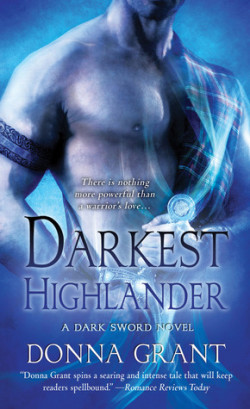 DARKEST HIGHLANDER is the final book in the Dark Sword series by Donna Grant. This is Broc and Sonya’s story. For years, Broc has watched over Sonya and Anice. However, when Anice dies, Broc finds himself revealing his feelings to Sonya as if he can’t stop the words from flowing out of his mouth. He is drawn to her in a way that is undeniable. So when Sonya runs away and is almost attacked by a wolf, Broc takes his Warrior form and goes on a frantic search to rescue her.

Our hero and heroine have some unique abilities that make them very special. Broc is possessed by a god called Poraxus. With this inside him, he is able to grow bat-like wings while his skin turns into an indigo blue, giving in a much needed advantage against the wyrran. Meanwhile, Sonya is Druid, though when we start the book, she doesn’t have access to her powers. I really enjoyed the paranormal elements of this book. It added such a nice touch to the characters, especially Broc who I couldn’t resist.

“Ever so slowly, he leaned toward her. His eyes held all the passion, all the yearning, she had ever hoped to see. His forehead touched hers, their breaths mingling as time halted.
Excitement bloomed and built within her, drowning her in the fervor of the desire that grew between them. It was palpable, tangible. Real.”

I am having a hard time rating this book because I did think that the first part of the book was slow. It isn’t until midway through the book that the magic really happens. When the village that Broc and Sonya are hiding in is attacked by wyrran, Broc tells Sonya to lock herself in the room while he kills them all. When things turn for the worse, Broc finds himself in his enemy’s hands; Deirdre now has her claws into him and it is now up to Sonya to try to help him.

I had a hard time liking Sonya in the beginning. At the start of the book, she whined a lot about her fading powers. She kept telling herself that she was a Druid and that without her powers, she was nothing, meaningless. I wanted her to see past that. And thankfully, she does! There is a lot of growth in her character and I loved reading about it.

The chemistry between Broc and Sonya is potent and undeniable. You can feel it from the very first page. I was definitely rooting for these two to be together.

There is also some insight into the spinoff series that Grant has planned called the Dark Warriors. I love it when authors weave their series together. Midnight Master’s sounds promising so I’ll be sure to check that new series out!

WOW… the cover on this book is awesome!!!!

Thanks for a great review! Definitely want to try this book and the series!

This sounds like a great book. Can’t wait to read it. Thanks for the review.

I’ve had this one on my wishlist since I first saw the cover and read the blurb. Thanks for the review!
(\___/)
(=’.’=)
(“)_(“)
alterlisa AT yahoo DOT com
http://lisaslovesbooksofcourse.blogspot.com/

Wow this sounds sooo good. I love Highlanders and Paranormal romances, so putting the two of them together it must be amazing!

I’m glad the next in the series is Broc…but sad that it’s the last. I hope the spin off will tell the other warriors stories…because there are so many that I am curious about…like Logan?

New to me series! I appreciate your honesty about the heroine and the pace of the story. As long as she does grow, that’s fine with me.

I’m intrigued by Darkest Highlander because it mixes two of my favourite genres together…I’m adding this series to my wishlist!!!!

Historical and paranormal are probably my two fave subgenres too! So this is a good series to get into!

And Trish did an amazing job with the cover! She rocks!

This sounds and looks great! Can’t wait to read this series!

I’m pulling for this couple – want to see how they get together.

This book sounds great just like all the others in this series. Donna Grant is a truly talented author.

Yummy, I do love those Hunky Highlanders, Swoon…

Sounds like a fantastic read in fact I am putting this on my wishlist!