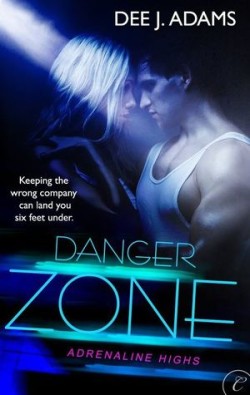 This was a pretty creative idea, the main idea of this book is that Hollywood is now making a movie of Tracy’s story (from Dangerous Race).Ellie Morgan gets the part of the stunt woman during the filming. She’s a confident young woman even though she’s very dependent on her best friend and roommate Ashley. Quinn Reynolds is the younger brother of book one’s hero, Mac. He comes into town from England to try and convince his brother to sell their company to a particular guy instead of a different bidder.

But since his brother doesn’t have a lot of time for him, he finds himself being extremely attracted to Ellie and makes his move right away to try and get with her while he’s in town. Quinn is successful, wealthy, and GQ good looking. Ellie can’t understand what he would want with her, especially after she makes it clear that she’s not into one-night stands and she won’t get be giving it up.

But trouble follows Quinn. There’s someone after him and they want him dead. While this person has attempted in the past, their efforts were not discovered. Now he keeps trying but there are other innocent bystanders who will be getting hurt.

The story was a bit slow to get going, but even so it was cute and I think Quinn and Ellie were great together! And Quinn is verra sexy and hot!

To me this series is light on the suspense but very well written which makes it enjoyable to read. They do have obstacles to get through in such a short period of time, but I have to say Quinn stood by Ellie the whole time. I am curious to see if there are more books in this series.

Born and raised in El Paso, Texas, Dee J. moved to Los Angeles, California, where she acted in television and commercials for almost twenty years. An award winning author, she writes contemporary romantic suspense. She's a member of SAG-AFTRA and RWA and was thrilled to be chosen by Audible to narrate three of her (four) books in the Adrenaline Highs series (Carina Press): Danger Zone, Dangerously Close and Living Dangerously. All of her books, including the first, Dangerous Race, and her most recent release, Against The Wall, are available at Amazon, Barnes & Noble, iTunes, Kobo, ARe and other e-book distributors.
She has been married to the love of her life for over 25 years and they have a 17 year old daughter who brings them nothing but pride and joy.

Sounds like a good story. Will have to check out this author and this series. Thanks for the review.

I love romantic suspense…I’m definitely adding this to my wishlist!

Great review and I love this series. It is what got me back into reading Romantic Suspense.