Join our newsletter to be the first to hear our latest news! Learn More
Home / Reviews / Review: Take No Prisoners by Cindy Gerard 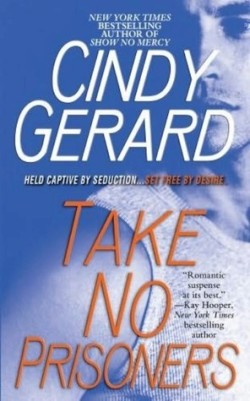 Take No Prisoners
by Cindy Gerard

The hero of TAKE NO PRISONERS is a man of little words. He’s a meticulous one, Sam Lang. And while he was the polar opposite of Johnny Reed, his brother in arms, I found myself loving Sam’s responsible, take-no-shit streak. He was reliable, cunning and badass in a subtle way.

Sam Lang left BOI after his sister and her husband were killed in a car bomb incident – an incident that would not have occurred if Lang hadn’t pursued Nader and his criminal activities. His sister’s death was a warning to Sam to back off or pay the price. And so, with a heavy heart and a truckload of guilt, Sam did.

Abbie Hughes, our heroine is a spit-fire in disguise. Busy with school and a job as a blackjack dealer, Abbie’s life is on the straight arrow. However, her younger brother, Cory lives his life tinkering in places where he shouldn’t be. Cory goes to Honduras to collect his inventory for his “job” but then gets caught up in a huge mess involving two major rival gangs willing to do anything, including kill to get their hands on a national treasure.

Stuck in the middle, Cory is taken hostage while the diamonds are being shipped back to the States to his sister, Abbie for safekeeping. This act brings Abbie into the loop. To get her brother back, Abbie teams up with Sam Lang and they go through hell and back in their journey to rescue Cory.

What can I say? This is another keeper by Gerard. While different than Gabe Jones in the first book, Sam does make my heart go pitter-patter in another way. I liked his slow control, but I also loved it when he and Abbie indulged a little bit and let themselves go.

TAKE NO PRISONERS has one of the best action sequences I’ve read in a long time. Cory’s rescue scene is by far the most action-packed scene I’ve read. It’s sharp, smart and soo adrenaline-pumped, you’ll feel like you’re experiencing it as you read it.

Another thing I loved about this book is that the women of the series are very much involved in the action. They don’t stand by in the trenches and nibble their nails in anticipation and worry. They are right in the heart of all the action and I LOVE that!

Abbie Hughes shows her courage in this book countless times, making her one of my favourite heroines so far. For a woman who doesn’t have any combat experience, she’s a sharp-shooter.

Also introduced in this book is Crystal Debrowski, the heroine of the next book, WHISPER NO LIES. Crystal was a trip and I am looking forward to reading about her blooming relationship with the gay cop cowboy. Actually, I shouldn’t say that. Johnny may shoot me. Or frisk me. In which I much prefer the latter.

Here’s a scene from the book:

Dinner. All Crystal had agreed to was dinner. It begged the obvious question, then: So how had she ended up buck naked and tied to her own bed with flex cuffs?

NOW, I bet you’re curious too!

I love a good action sequence and it sounds like the book has all the elements of an adventure romance going for it.

The more reviews I read on here about this series is the more antsy I get to get my hands on them…I’m hoping 2012 turns out to be a great book buying year for me!!!!

Action-packed is what I would describe this series, Sophia Rose!

I hope it’s a good year for you too, Timitra! I’ve been devouring this series!