Join our newsletter to be the first to hear our latest news! Learn More
Home / Reviews / Review: Show No Mercy by Cindy Gerard 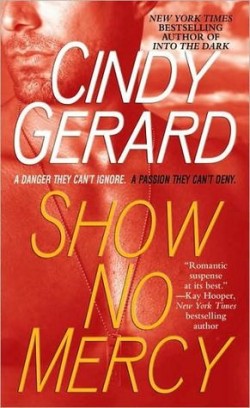 Show No Mercy
by Cindy Gerard

In the first book of Gerard’s Black Ops, Inc series, we see Gabe “Archangel” Jones and Jenna McMillan again. For those of you who follow Gerard’s Bodyguard series, you’ll be happy to note that this book starts off with a fantastic beginning that hooks you right until the end.

SHOW NO MERCY is a show-stopper, the kind of book where once you start, you won’t be able to stop. I made the mistake of trying to sneak a few pages in before bed and ended up staying up the entire night to reach the middle of the book. Despite feeling the fatigue the next day, it was still worth it and I finished this book in less than 24 hours from when it showed up on my doorstep.

Gabe Jones is a major reason for this. Our hero is a tortured one through and through. His experiences with Task Force Mercy and his later decision to follow Nathan Black’s steps into a private security team have made him a hardened man. But it’s his personal experiences that have shadowed his soul. His love, Angelina was brutally tortured and killed by Erich Adler, Gabe’s greatest enemy. Her death still haunts him like a clouded sky and when Jenna walks into his life again, Gabe doesn’t know how to get over this burden that follows him day by day.

Jenna returns to Gabe’s life and brings back this heat that Gabe attributed to the Buenos Aires climate. I respected Jenna a lot. Not only did she show her vulnerability in times when the adrenaline wore off and all was left was fear, but she was also a strong, courageous woman who could run with the big boys. Her sass made her memorable, made her banter with Gabe entertaining. But perhaps the best part of her character was the fact that she knew what she wanted. Gabe held her heart and she fought hard for him. She laid her heart out on the line.

Cindy Gerard will most likely be a new favourite author of mine. I adored her writing style! Her pacing was perfection, pushing the plot forward without having events happen one after the other. There was a lot of action, but there was also a lot of time spent digging into the characters and learning what made them tick. I haven’t read a book that delved deep into the character’s psyche as much as this one did in a long time.

Another notable point is the “guy speak” in this book. I haven’t smiled at idle banter like this since the Black Dagger Brotherhood. These men in the Black Ops are loyal to the bone, honor in every fibre of their being. And you really get the feeling that they’d do everything in their power to protect one another. I loved it!

Sam stared at Gabe and frowned.
“What?” Gabe asked.
“You been accessorizing at Toys R Us?”
Gabe followed Sam’s glance down to his waist. He actually looked embarrassed as he tugged something out from under his belt and tossed it toward Jenna as if it were a hot potato.
She caught it. Knew from the feel of it what it was before she even looked down, disbelieving and unreasonably happy that he’d rescued Nugget.
When she met his eyes he shrugged a shoulder, tough-guy code for “No big deal, I don’t want to talk about it.”
“You seemed attached to it,” he said, sounding grumpy.

I need to add this series to my list. Great review.

You make this book sound really good and I do love these kinds of stories myself.

Same to you, Sophia Rose!

I haven’t read anything by Cindy Gerard yet even though I’ve heard great things about her Bodyguard series. Ann after reading your review I’m chomping at the bit to get and read this book!!!!

Review: With No Remorse by Cindy Gerard | Under the Covers Book Blog