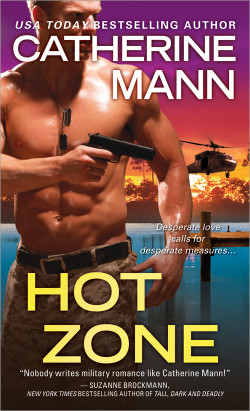 HOT ZONE, the second book in the Elite Force series by Catherine Mann draws you from page one and doesn’t let go until the very end.

Attorney Amelia Bailey and her nephew, Joshua who is just an infant are trapped under the rubble of an earthquake in the Bahamas. Despite the fact that a building is lying over her, Amelia maintains a clear head. Pinned down with no way to escape, Amelia waits it out, touching her nephew’s pulse every now and then to make sure he is still alive. Hours…days pass and they are still trapped until Master Sergeant Hugo Franco comes to their aid.

In these moments of extreme fear and desperation, Amelia and Hugo find comfort in one another. Not a woman to be easily frightened, Amelia takes what reassurance Hugo gives her. He tells her that his men are working on getting them out. That he’ll do everything in his power to take care of Joshua, whether he gets out of this mess dead or alive. Soon, Amelia finds herself trusting this man who has crawled through the rubble to reach them. But can this trust lead to love?

Hugo has a past that has haunted him. The ghost of his dead wife and child follows him on his assignments day by day, weighing on his heart like a rock. The presence of Amelia and seeing Joshua bring forth these painful memories. But before Hugo can really understand what this means, Amelia and Hugo are thrust into a dangerous world of kidnappings and human smuggling.

With undeniable sexual attraction, fast-paced action and equally quick-witted banter, HOT ZONE is another hit for Catherine Mann. I really admired Amelia’s personality. She was strong, fearless and loveable all at the same time. She was the perfect woman for Hugo who is loyal and honourable to the bone.

Though technically this is the second in the series, you can still read this without having read the first, COVER ME. There is some slight crossover between the two books, but nothing overly vital that will make you regret starting with this one.

Mann has a lot of things going for her in this series. With UNDER FIRE coming out in May 2012, Liam McCabe and Rachel Flores will get their own adventure. We get a taste of them in this book and it makes me want the next one so much more.

Great review. I read Cover Me and loved it. Now I am really looking forward to reading Hot Zone.

Thank you! Hope you enjoy it!!

I have book 1 of this series on my wishlist, thanks for the heads up on how good the second one is, I’ll get them both this year!!!!

New author for me. Going on my TBR now! Thank you for a great review!

I have this series on my wish list. The plots look good with the personal barriers and then the action. I love seeing the positive review.

Thanks ladies, it was a good rom sus. And I hope, Didi that you like this new author!