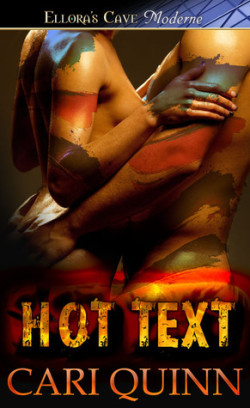 My first read of Cari Quinn’s books and I am very happy I took the opportunity to do so. I truly enjoyed her writing and boy, can she write smexy, hot scenes.Jeff Maddox, twice divorced, is a book editor and big brother to Daisy who is dating a recently separated man (Lon). As a big brother, he steps in to interfere in his sister affair hoping to end it. After Jeff found Lon’s phone, he thought to call his wife to inform her of his activities. Eeeeevil right? But the plot to end that affair backfired. Instead, it leads him to an affair of his own, an affair to remember and one never to regret.

Karyn, who is in a middle of a divorce, receives a text from a stranger wanting to return her husbands’ phone. Willing and very curious she meets him for coffee. However, Karyn is already aware of Lon’s activity and not a bit bothered by it. They had fallen out of love a while back. Funny how things work out that way. =D

It started out with a single text, a cup of coffee together, smexy texts then a “booty call”. Their texts and conversations were full of sexual innuendos, which was fun to read. I love a good flirty couple. And in spite of just having met, both Karyn and Maddox were comfortable exploring each other.

Divorce is never easy and finding someone new is hard to do. This sounds like a very plausible story as we live in a world were divorce is a rising status, not always a bad thing, But I do want to say that I applaud anyone who can survive a divorce and rise up to cont. to believe love is still a possibility for them.

Just like our H/h, without taking a chance, they wouldn’t have found their HEA. And in spite of this book being too short, Ms. Quinn leaves us with a very satisfying ending.
No doubt that I will continue to read more of Ms Quinn’s work!

Notable quote/scene:
~Sexy window scene and painting scene.
~”Reason ten million why women and men had trouble being friends. Once attraction flavored the stew, good manners went out the window.’
~Jeff’s text: “what r u wearing? Karyn: “Boxers & my shotgun’s beside me…”

USA Today bestselling author Cari Quinn wrote her first story—a bible parable—in 2nd grade, much to the delight of the nuns at her Catholic school. Once she saw the warm reception that first tale garnered, she was hooked. Now she gets to pen sexy romances for a living and routinely counts her lucky stars. When she’s not scribbling furiously, she can usually be found watching men’s college basketball, playing her music way too loud or causing trouble. Sometimes simultaneously.

That’s an interesting situation with siblings and divorcees involved. I love witty bantering in stories.

Thanks Sophia, it is compliacated. Lol.