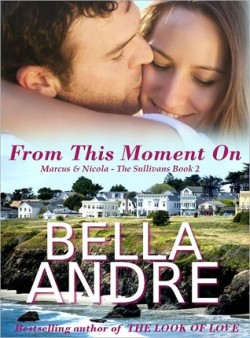 From This Moment On
by Bella Andre

Marcus, the eldest of the Sullivan brothers and the winery owner dreams of settling down with a lovely wife and having kids. In FROM THIS MOMENT ON, Marcus’s dreams are shattered once he finds his girlfriend screwing another guy. She wants to leave him, telling him that their relationship was falling apart, that Marcus never ever fought for her. A girl wants to be cherished and loved. Too bad Marcus doesn’t actually love her.

In an attempt to forget her betrayal, Marcus goes to a club to find a woman to spend the night with. A one night stand is just what he needs. No commitments, no promises, just physical release.

But then Nicola walks into the club in a form-fitting leather dress and steals his breath. She dazzles him and him and Nicola hit it off. They exit the club together, planning to spend the rest of the night between the sheets. But their one night stand doesn’t go as planned.

A night meant for hot sex and oblivion turns into a night that neither of them can forget.

Marcus doesn’t know that Nicola is a musical pop star who goes by the name of Nico. When her sister, Lori aka Naughty asks him to spend the day with her at her work, Marcus finds out that Lori is actually the choreographer for Nico. Neither is able to escape this undeniable attraction for one another.

Unchained sensuality laces this book. Who would have thought that Marcus Sullivan, the dapper businessman could be so deliciously sinful in the bedroom? I was surprised and thoroughly enjoyed reading about Marcus and Nicola. This series just keeps getting better and better.

Another great thing about this book is the presence of the other Sullivans. I adored Lori and can’t wait to read her story! Those phone calls with that certain someone really made me want to know what her story is. Another Sullivan I’m interested in reading about is Smith, the movie star of the family. He provided great comic relief in tense times and I just loved that he wasn’t afraid to stand up to Marcus, his older brother.

Bella Andre has a great series on her hands and with several more stories to be told, I know I’ll be one of those eagerly awaiting the next release.

Great review Ann!!! I can’t wait to be able to get my hands on this series!!!!

I want to read this book and the future ones too.

ARC Review: From This Moment On by Bella Andre | Under the Covers Book Blog

[…] If you read the self pubbed version, the book is relatively the same with a few more additional scenes. I loved them and think they are worth a second look. After rereading this book, I found that I loved this more than I did when I first read it – and I loved it a lot that first time too! If you’re interested in reading more of my thoughts of this book, you can read my first review of the self-pubbed version here. […]