Join our newsletter to be the first to hear our latest news! Learn More
Home / Reviews / Review: Feel the Heat by Cindy Gerard 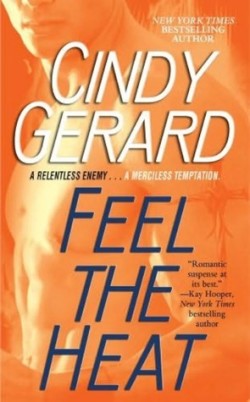 Feel the Heat
by Cindy Gerard

Cindy Gerard continues her stellar Black Ops series with Raphael Mendoza’s book, FEEL THE HEAT. Taking a different but still interesting route this time, the author sets the first part of the book in Washington, D.C. where B.J Chase, an Defense Intelligence officer gets caught up in case where a stolen E-bomb is floating around in the world. This E-bomb has the ability to take down all electronics in half the country permanently. No cars, internet, gas pumps ever again. There is a traitor amidst the NSA where this person sold out their country for some big bucks. Whoever this person is is now targeting Stephanie Tompkins, a familiar character whom we met in previous books. With a hit on her persons, B.J. must help Stephanie cover her six as they call in the BOIs for added assistance.

B.J. and Raphael have had a bit of a rough start. After being compromised in a previous assignment, both are still holding grudges against each other as they are now faced with working with one another. B.J. is a tough as nails chick who knows what she wants and how she wants it. She is a self-made woman who doesn’t need the help of a Latin charmer to run her life. In fact, B.J. is the most standoffish and toughest heroine we’ve seen in this series. So much so that at times, B.J. was kind of a bitch.

But as the story progressed and she fell prey to Raphael’s come-ons, we saw another side of B.J. that made me like and respect her. A wall guards her heart and in this book, Raphael tears down those walls and is the first to really show her that she can be loved. B.J. allows her past to rule her future to the point where she believes that love isn’t in her capacity. Raphael shows her that she is wrong, that loving someone isn’t easy but it’s worth it.

As all this emotional development happens, B.J. and Raphael go to Columbia to Rafe’s Uncle’s home, who has ties to a drug cartel to get much needed information. In order to slip in without raising suspicion, B.J. has the play the part of a dumb blonde. Her new name is ‘Brittany’ and she, um *smacks gum and twirls hair* likes to party! This part was highly entertaining and brought in some really great comic relief in dire times.

Though this can be read as a standalone, I highly recommend reading the series in order. Not only would you get a richer experience but you would happy to note the different familiar faces we’ve encountered so far in the series.

Speaking of that, Stephanie, Bry’s younger sister makes up a huge part of this book. And with Stephanie, Mean Joe Green isn’t far behind. Their relationship really blossoms in this book and made me wish that we have Joe’s book sooner! He’s some hot stuff and I wouldn’t mind getting burned by him once or twice.

These romances that take place under such extreme situations are fascinating to me.

I agree with you Sophia Rose they fascinate me too!

Oh yes, the whole series is like this! Each book has a new exotic place!

Review: With No Remorse by Cindy Gerard | Under the Covers Book Blog