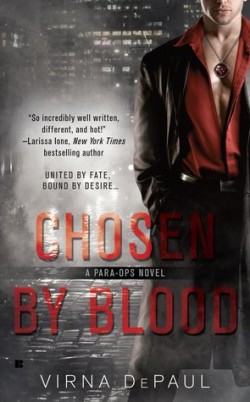 Chosen by Blood
by Virna DePaul

I have such mixed feelings on this book. Some parts I thought were really good, others seemed a little confused and under developed and some bits just annoyed the bloody hell out of me.Knox is one of the few healthy vampires around. During the civil war between humans and vampires the humans released a vaccine that renders human blood void inedible to vampires. But with Knox being a dhampire, half human half vampire, starvation doesn’t effect him as quickly as his pure blood kin. Now the civil war is over and he is clan leader of his group of vampires and he will do anything to get an antidote for the anti-vamp vaccine which is slowly killing off his family, his race, even agree to head a new Para Ops team, a mixture of hand picked Others and humans. There first mission, find the antidote.

Agent Felicia Locke has been in love with Knox since she first saw him and he has felt the same way, however, he was married to her best friend. However, her friend has died and they are now working together on the Para Ops team, but Knox, as clan leader, still has the duty to marry a vampire bride so help repopulate his race, a duty he can not put aside even for Felicia

This was a brand new experience for me, I liked the general story, the world being created and even most the characters, but what I didn’t like? The romance. Knox and Felicia’s romance just managed to annoy me, I complete understood why Felicia wouldn’t be with Knox, he was going to marry someone else for the express purpose of knocking her up, all in a very honorable and selfless way of course, and then she would be his bit on the side. Clearly in the hundreds of years the Knox has been alive he hasn’t gotten to know human women very well. Unfortunately this didn’t endear me to him, and despite him obviously being crazy in love with Felicia and her with him, I just didn’t feel any enthusiasm for their HEA.

However, I did like the other guys in the team, especially Wraith the wraith, I really can’t wait to read more about her, she kick ass and invulnerable to death, yet the most vulnerable person on the team, I loved watching the sparks fly with her and O’Flare. This was another great aspect of the book, I loved seeing all the team together and fuse into a unit, I don’t think they all entirely trust each other yet and I can’t wait to see what happens next with all of them.

The world building was also interesting and one of the things I liked about this book. Others are basically all paranormal creatures, so weres, vampires, wraiths and mages, and they have recently “come out” in America, and this has caused a few civil wars. The civil wars mentioned was one of the things I thought weren’t explained very well, was the civil war between humans and vamps or humans and all Others, or was it every race against every race? This wasn’t fully explained, or if it was I didn’t catch it.

But, one part that was explained very well, and in juicy detail? The sex. It was hot! Ms DePaul writes some great erotic scenes, Knox may have annoyed me, but I reckon he could screw that right outta me, the dhampire has skills! What did bug me was when they got all hot and bothered at such silly times! Picture it. You are sat in the freezing cold, on hostile territory, you hear an enemy vehicle approaching, what do you do? Do you make out like teenagers, or do you keep your eyes on the road looking out for the people with big guns? Well if you are Knox and Felicia, clearly it is option one and you have a quick tonsil tennis session. *rolls eyes*

Despite my seemingly endless complaints about this book, I did enjoy the story and the characters, even if the romance wasn’t as good as I hoped it will be. I will definitely be reading the next book to see what happens with my favourite Para Ops team! 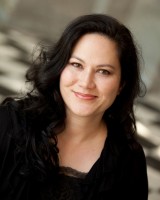 A former prosecutor, Virna DePaul writes "heat, heart, & HEA" for Harlequin and Random House. She is also a bestselling Indie author, with Bedding The Wrong Brother being a top 100 contemporary romance on Amazon with over 150 5* reviews.

I read this one and just finished Chosen by Fate last night. I have mixed feelings about both books as well. I do like the story arc and the other characters as well.

Sweet! You just reminded me to go buy the newest one 🙂 I’ve read so many different series I can never keep track of release dates!

I haven’t read this series yet and it sounds like it has some action to it.

I can’t wait to start this series. Thanks for the review.
Carol L
Lucky4750 (at) aol (dot) com