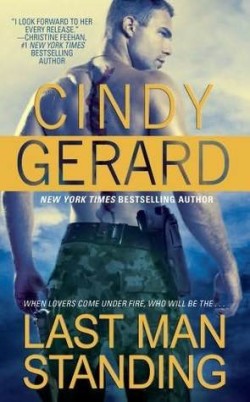 LAST MAN STANDING is the last book in Cindy Gerard’s BOI series. While it’s been an amazing run with this series, I’m still sad to see it end. I devoured these books one after the other, reading a book per night. Once you pick these babies up, you simply can’t stop.

LAST MAN STANDING is no exception. “Mean” Joe Green and Stephanie Tompkins have been characters we’ve seen throughout this series. Their relationship started in FEEL THE HEAT but now in their own book, readers finally get the story that they have been eagerly waiting for.

If you’ve followed this series from the beginning, then you know that Stephanie’s brother, Bryan was killed in Sierra Leone in the first book, SHOW NO MERCY. Fifteen years later, Joe still feels that something wasn’t right about that night. So as he follows his gut and travels to Sierra Leone to find out what really happens, he breaks Stephanie’s heart in the process, leaving her without a good enough explanation as to why he can’t be with her.

However, when Stephanie finds out that Joe is accused of killing a priest in Sierra Leone and awaiting trial for it, she realizes that there is another reason as to why Joe simply walked out of her life.

The Stephanie we knew in the previous books isn’t so much in this one. She has grown as a character and has been toughened by her exposure to the BOIs and their daily routines. Threats to her life no longer scare her. Her only fear is losing Joe. And this is the reason why she buys a ticket to Sierra Leone to rescue him.

On her journey she bands with Suah, a fifteen year old teen who has seen the worst of the war in Sierra Leone. Though she senses that this could end up more deadly than she first anticipated, Stephanie has no choice but to trust the kid. They work together to free Joe before he is transported to a maximum-security prison and get him out of there.

It shouldn’t be a surprise to know that I finished this book in one night. Again. Gerard simply writes the best romantic suspense stories out there. It’s hard not to get sucked in with her easy-to-read writing style and ability to get into her hero’s head.

While this isn’t the most action-packed book of the series, there is still a fair amount of heart-pumping action to get you reading into the wee hours of the night. I just love the fact that Gerard weaves the events from the first book to set up the premise for this one. It showcases her impeccable planning and she really does a fantastic job of closing out the series.

But fear not, Gerard is starting up a new series called One Eyed Jacks. We get a great glimpse of the new hero of the first book, Mike “Primetime” Brown. He’s called Primetime because his face is the kind you’d see on TV – penetrating eyes, killer smile. Yup, the stuff we ladies lust for. I’m sure this new series will have me hooked like the BOIs series have had me. I’m exciting for more all-night reading. Bring it on, Gerard. Bring it on!

i’ve never heard of this series but it sounds good. i am going to check out the first book now. thanks!

Oh the first book is my fave!! Enjoy

I love this series too. I can’t wait to read this one. Ohhh a new series? Woop!

You’ve done it again Ann, you have me chomping at the bit ot get my hands on Last Man Standing!!!! I really enjoyed reading all your reviews for this series!!!!

Have not read any books by this author. After reading this review I will be checking out this author and her books. Enjoyed the review. Sounds like a good read.

I haven’t started this series yet, but its on the wish list.

Sounds awesome based on your review.

LOL Timitra, Oops? Well I hope you enjoy this one as much as I did!

Shelly and Sophia, I’m POSITIVE you’ll love this series. It’s hard not to love this men. Gerard really gets into their heads. I loved every moment of this series.

Tyraa, I cant wait for the new series!

I am such a fan! Love this interview, review and excerpt I can’t wait to get my hands on this book! Thanks so m uch for the chance to win 🙂