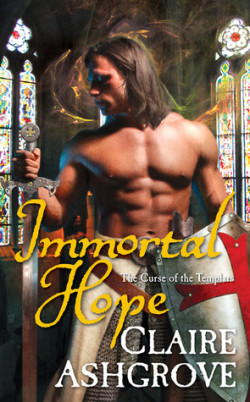 Who doesn’t know a little something about the Templer knights? Most recently brought into the spot light by Dan Brown and other religious conspiracy books, now romance takes a bash out of them and in true romance style have turned them into an order of (semi chaste) immortal knights sworn to protect human kind by battling the denizens of hell. However, each time they kill a demon they take the taint of evil into their souls, until eventually they either become demon knights or they are killed by the brothers they serve with. After 100s of years fighting the Templers are tired, their numbers decimated and all their souls full of darkness. The only thing that can cleanse their souls are the Seraphs, women who bare the mark of the knight they are destined for, who can then not only cleanse their knight’s soul, but prevent any further evil entering it.

Although there were somethings that I found I didn’t like about this book, over all I feel like I have discovered hidden treasure! I loved the idea of this book and the Templer knights, I found it a little strange at first that a sect of supposedly chaste knights found their salvation by joining with a woman, but I soon got over it and enjoyed reading the story.

First of all I am going to let loose the little rant about what I didn’t like out my system. In a word, communication, or in this case the lack of it! I found Anne’s insistence of NOT telling Merrick that they were to be paired very annoying, especially when she saw the amount of pain and shame it caused him to be lusting after a woman he thought belonged to one of his brothers. And then no one telling Anne the consequences of her not matching her mark also frustrated me! Why, oh why, can people in romance novels not bloody well talk to one another?! Drives me insane!

Phew, rant over! Now back to what I did like, the knights themselves were great, especially Merrick’s friends and I really hope that they all get a book, you can really feel the camaraderie between the Templers. This book also had angels, and I liked the way they were depicted as generals, a different archangel in charge of different groups of Templers, I also liked that it didn’t shy away from Christian religion, they mentioned God and the angels as his messengers.

Despite my little annoyance with Anne and Merrick (as detailed above!) their romance was good, you could see they had chemistry, but also that they grew to care about each other. As for the hotness content, it was hawt, but also a little sweet to.

I thought this was a great read and I will definitely be reading the next one when it comes out. 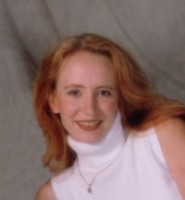 Building on a background of fantasy game design, a fascination with history, and a lifetime love of books, award-winning author Claire Ashgrove brings to life action-filled, passionate journeys of the heart. Her paranormal series, The Curse of the Templars, marries the history of the Knights Templar with the chilling aspirations of the most unholy--a must-read for speculative fiction fans. She also writes as the National Bestselling Author Tori St. Claire and historical romance author Sophia Garrett.

In her non-writing time, she’s runs Finish The Story, a full-scale editing house co-founded with Bryan Thomas Schmidt. She lives in Missouri and enjoys cooking, studying ancient civilizations, and spending downtime with her two sons and too-many horses, cats, and dogs.

Oh! I have this one already on my wish list. I like the idea of the Templar Knights woven with fantasy and romance.