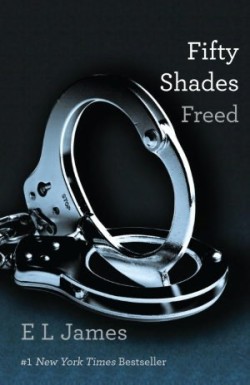 E. L. James wrote an outstanding story to end the Fifty Shades Trilogy.  In this 3rd and last installment of Fifty Shades, Ms. James has gone deeper, letting us know who Christian Grey is and who Anastasia Steele is in his life.  We see them mature from the beginning of their marriage and get to know each other as man and wife. An amazing transformation for both our hero and heroine.

Let me start with our hero.  Christian Grey is a complicated man through and through. Right from the first page, my heart sank for him, as the last memory of his mother played out for us to see.   The why of it all, what started all the Shades of Grey, now out in the open.

With his tragic past replaying in his thoughts, his only reprieve is a sense of control hence the Dom and an Alpha trait.  We see him grow, get past his issues and become a better man for his wife.  It is fascinating to see him as a husband. As extraordinary as he is, he is as typical as any man is in his first year of marriage.  When the going gets tough, there will be issues with drinking, walking out, shouting and boy this really pissed me off…infidelity.  Well, not so much infidelity but an ex-girlfriend will always come up one way or the other.  Oh yes, “Mrs. Elena Bitch Troll Robinson” and psycho Leila will have their cameo.  But no worries, Ana’s “Inner Bitch” will also have a cameo and our Fifty will learn all of Ana’s Hard Limits the hard way.

I know, not very many will agree with me but I liked Anna and I actually enjoyed her Inner Goddess.  Her subconscious and her inner Goddess continue to show up at random moments, which I enjoyed. Clearly, it was her way of expressing and recognizing what she felt deep inside. I believe it is her way of coping with certain events with Christian. And if you know this couple, it’s not always “hearts and flowers” as they would like it to be.

As Ana adapts to her new life, she must face a few battles but overcomes them with excellence.  Among them are accepting her new life style of being rich, last name issues, independence as a woman, jealousy, and of course her sexuality.  I really am in awe with this girl.  She continues to support him, tolerate him and will stand up to him.  She will give Christian everything and anything he needs including her life if need be. At the end, she is THE ONE to make him a better man, not that he’s not great to begin with but a better man indeed.  Ana has become the world to this Master of the Universe.

In my opinion, this is more of a Romance story than a BDSM book. Though romance is more of what I see, Ms. James had given us a fair amount of smexy scenes.  I will promise that there will be a lot of learning for both Ana and Christian in the “toy” department.  *wink-wink* There will be lots of action, not just the “kinky f*ckery” way but life and death action as we will see Jack Hyde.  We also see some of Taylor and a little story of him.  I think he deserves a book of his own.  If and when that happens, maybe we can get a glimpse of our Fifty again (here’s hoping).

It is Bittersweet to say that this couple has finally found their HEA.  I am as happy as I am sad that this is the end of Fifty Shades.  Bravo Ms. James in creating such a wonderful love story.  *ARC provided by publisher

I really want to you for reading it before anyone but I can’t. 🙂 Great review and I’m glad that its more of a romance in it.

I’ve heard great and interesting things about this series, although it isn’t my usual type of read I am curious.

Thanks ladies!
Marika, I was fortunate to get a hold of this for review. I actually took my time with this knowing it’s the last. and I definitely enjoyed it.
Jules, It’s a great trilogy and it maybe worth your time to atleast read the first book to see if you like it. It truly is a deep romantic story.

I’m so excited for this! I am also sad it is the last one and I will try to take my time with it! But it will be hard since I devoured the last two in only a day or two.

Such a great review…this is a new author and series for me…thanks for the recommend!!!

awesome review. I’m really curious, so I might pick it up, though it kind of scares me a little I guess

Enjoyed the review. Will have to check out this series. This sounds like a really good story.

I BOUGHT MY COPY TODAY!!! INFIDELITY!!! OH NO!!!!! I agree with you Angel. Knowing that this is the last book in the series I want to take my time and savour every scene and re-read some scenes over and over again so the visual imagery is etched in my mind. One part of me wants to know what is going to happen next (INFIDELITY!!!) and rush through it but I know this is one book that you want to treasure and take the time to read so you really feel that you are in that world watching everything play out… Read more »

Love this series! The painful moments and learning experiences just make the tender moments all the sweeter. Can’t wait to read the final story!

Ollie, you’ll see what I mean.

I keep hearing about this trilogy and meaning to start it. Don’t know why I haven’t yet. Need to fix that ASAP.

Thanks for the wonderful review! I’ve been wanting to try this series as I have read such positive reviews.

Great review!
I absolutely loved this series! The bonus chapters of Christian’s pov were brilliant.
And as for Ana’s ‘inner goddess’, one word- hilarious!

This is & forever be my all time favorite book trilogy. What a ride. Christian, Christian, Christian. What can I say, I LOVE YOU! Ms. James’s… wonderful, compelling writing. I laughed, cried, got pissed off. It was wonderful. I really enjoyed his point of view at the end of the book. I have been ruined for anything other than the Fifty Trilogy. I’m truly sad it has come to an end. But no worries, I will read this trilogy over & over again anytime I have the need for a Fifty fix.

GREAT review, Angela! I’ve had this series in my ‘sights’…just hadn’t gotten there yet. It sounds like a good one!!

Hey chic! Very good review. You know how diverse my feelings about this series are. I’m so conflicted over these books that I can’t even write a sensible review of them! You did a fabulous job with this review! You gave a complete and informative review without any spoilers! I’d never be able to do that!

I found this blog on the last tour for E.L. James and loved your reviews! (Thank you for so many good recs)
Oh Fifty! This is such a great series…usually I get all my books from the library – But I own these so I can read again and again.

Thanks for the review. I have been hearing so much about this series as of late. I have to check it out.

I flew through the first two books, so I cant wait to get my hands on this one!