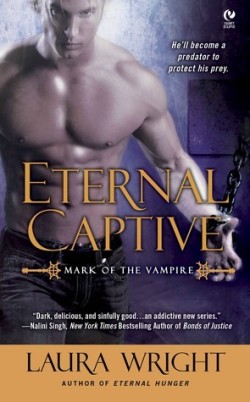 Lucian, the rebel.  Lucian, the don’t-have-a-care badass.  Lucian, the next in line Breeding Male.  He carries the gene that will likely turn him into the Breeding Male, a mindless creature that will only know and want to mate with any female and impregnate them.  This guarantees he will never have a mate like his brothers.  And also, the transformation shouldn’t be happening yet.  He should’ve had another century to prepare.But Bronwyn drank from him and activated this process and now his body is slowly going through changes, feeling urges.  Feeling a connection to Bronwyn.  Feeling a deep want.  But he can’t allow himself to have her.  That would seal his fate.

So when he hears that she is to be mated to another, that she bears another males’ mark, he should be happy.  Except he’s not.  And he’s not at all happy when she is kidnapped by one of the Beasts and kept captive by Cruen.  Only Lucian can rescue her.  And by doing that he’ll be sealing both their fates.

Lucian and Bronwyn worked well as a couple.  Lucian is over the top, loud and arrogant.  He is also one hell of a dirty talker 😉  This might’ve been extremely helpful to virginal and unsure Bronwyn.  And slowly she lost her inhibitions too.  There wasn’t a lot of fighting the attraction coming from this veana.  And she should’ve had every right to fight it being that she was now facing the Breeding Male, the one creature that had ruined her sister’s life and that she swore she would do anything to avoid.

Action and romance packed, with plenty of snark and some hilarious one liners.  This book kept me entertained and dying to see how things could get fixed.  Even though the solution at the end was pretty simple!

And speaking of the end… there’s a twist at the end I wasn’t expecting.  This will lead into the next book and it will be most interesting.  We also get to know the Beasts a little bit better.  Who are they?  Are they truly controlled by Cruen?  And what is the Orders role in all this?  We’ll have to wait and see.

very interesting ^^ i would love to read it

thanks you for the discovery

I have not read this series yet, but after this review, I’m going to get it. Thanks for the review.

Thanks for the review! Definitely caught my interest and I’m running over to add it to my Amazon wishlist right now!

I haven’t read this series yet but it’s definitely going on my booklist. Thanks for the review.

Great review…I can’t wait to get into this series!

I love a dirty talker!

Sounds great! Naturally, Francesca gets all the goods early. 🙂

Interesting review. I’ve heard about these books but haven’t had a chance to read any. I’m putting them on my wish list now.

sounds like a great book…really want to read it!!!
iluvmik16@gmail.com

Oh my, this book sounds wonderful. I have to read it.
luvfuzzzeeefaces at yahoo dot com

I’m looking forward to reading Lucian’s story and the rest of this series!!!!

Oh my, a dirty talker. 😉 Really have to check out this series.

So glad you liked it! Great review!

Great review! I can’t wait for Luca’s story and meet the beasts!

This sounds like my kind of series! Thanks for the review! This series is definitely near the top of my shopping list!!

I always pay attention to a recommendation – this looks like a good one.
sallans d at yahoo dot com

Looking forward to this read! The personalities alone make it sound interesting.

I haven’t started this series yet but I’m looking forward to it!

Definitely going on my wishlist! Thanks!
-Amber
goodblinknpark@yahoo.com

You had me at “Hell of a dirty talker” 😀

OMG.. I am forced to repeat myself…twice! This shit is hot and I LOVE this site!! You had me at “Dirty Talker”!;-)

thanks for doing this, great review also

Thanks! Hope you all enjoy it!

This series is on my TBR list. I must get them!