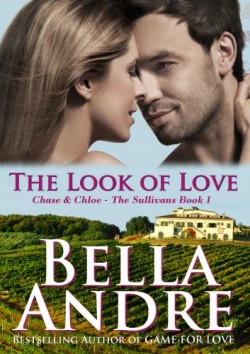 The Look of Love
by Bella Andre

THE LOOK OF LOVE is the first book in the Sullivan’s series and I think Bella Andre has a hit on her hands. Not only are the characters very likeable and engaging, but they hold a certain appeal that makes you respect them and their choices.

In the midst of a storm, Chase Sullivan, the photographer finds Chloe on the side of the road. Thinking he’s doing a good deed, he pulls over and tries to help this woman who is drenched to the bone and is sporting a shiner. Instead of pressing the issue, he convinces her to get in his car so he can drive her to his brother’s winery to stay the night.

Chloe has her heart shielded like a prison. It seems like nothing will get past her ward. However, Chase has this uncanny ability to tease her, making her feel safe in the shelter of his arms. He doesn’t try to push her. Instead, he coaxes her slowly with a lethal seduction that will end in Chloe’s complete surrender.

Bella Andre really amps up the sexual tension in this book. There are numerous scenes that made my palm sweat and heart beat a little faster. While the sex scenes between Chloe and Chase were wonderfully creative, I thought there were some cases where it was cut off in when I wanted it to go on. This is a testament to Andre’s writing. She makes me want more.

The reason being is that Andre creates characters that feel larger than life. Marcus, the winery owner and brother to Chase made a lasting impression on me that made me eager to start his book right after this one. When an author is able to present characters to readers and make us fall in love with them within one book, then I know that this will be a series that I will be following. Andre creates distinct personalities while still keeping that Sullivan trademark about them. I can’t wait to read about the rest of the Sullivans!

I have these books on my wish list. They do sound good.

I’ve added this series to my wishlist!!!

ARC Review: The Look of Love by Bella Andre | Under the Covers Book Blog

[…] For readers who haven’t tried this series yet, the Sullivans series follows a big, loving family whose career choices put them in the over-achieving category. There’s a winery owner, a movie star, a baseball player, a choreographer! There’s even a freaking firefighter! And I can tell you with my entire heart that I adore every single one of these characters. Andre possesses this unique talent of storytelling that makes you adore her characters long before their books come. And when she finally gets to their book, she doesn’t disappoint. She give her characters the most well-written, loving, all-consuming love… Read more »