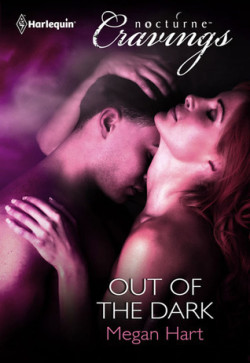 Out of the Dark
by Megan Hart

So if you know me you know that anything by Megan Hart is an auto-buy for me.  Anything she writes I buy, I read and enjoy.  This was really no exception.  The Harlequin Nocturne Cravings are basically short stories that are not part of a series or even related.

This was just a bit darker than I was expecting.

Starts out with a bang!  Girls night, bachelorette party, and Celia meets a hunky geologist than rocks her world.  Luke is any womans fantasy man.  He can make your toe curls even though he’s not Mr. Six Pack Abs.  After their one night together though he goes to a cave to do research with his team.  And he doesn’t come out the same.

Throughout the book I wasn’t sure if he had just lost his mind truly or he really was attacked by whatever creatures lived in the cave that fed on him for 24 hours.  He keeps coming back to Celia on and off whenever it strikes his fancy between going hunting for the creatures of the night.  And everytime she lets him back in.  It’s twisted and sexy at the same time.

The only thing I thought could’ve been developed better was actually explaining what the hell the creatures were and what they did.  I felt there was a lot of fade to black on those aspects.  But I was very happy there was no fade to black anytime Celia and Luke got together!If you are in the mood for something a bit darker but still very sexy then give this short story a try!  You won’t ever be disappointed with Megan Hart!