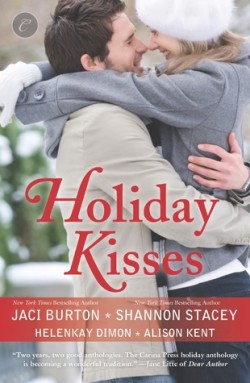 Such an enjoyable Christmas anthology. All that snow and the inconveniences *ehem* it can cause when it leaves two people stranded or forced to share confined spaces together, maybe with a bed around… This Time Next Year by Alison Kent – 3.5 Feathers

Breena is heading to her grandmas’ house to spend what will most likely be her last Christmas with her. After this she’s going to Malawi for a trip as a peace corp nurse basically and she probably won’t come back next year for Christmas and her grandma might not last much longer. But Mother Nature has different plans for her and on her way there she gets hit with a snowstorm and slides off the road, crashes her car and gets almost snowed in. In comes Dillon to the rescue. He’s the “mountain doctor” (as well as the mountain’s most eligible bachelor) and he knows Breena’s grandma is expecting her so he was on the look out and rescues her from freezing to death. He’s got skeletons in his closet but with Breena he manages to open up and wish for things that he never thought he could have. But is she the woman to put those ghosts to rest?

This story is the reason why I bought this anthology. Yes I know I could’ve bought just this story, but last year I enjoyed all four novellas in the Christmas anthology that the Kent Brothers # 1 was in sooooo here I am. The Kent brothers are hot general contractors. You gotta love a man that works with his hands *waggle seyebrows*. Much in the same way as his brother in book 1, Wyatt was previously married. But in his case he married the hot popular woman that everyone wanted. And he was the hot young stud all the girls wanted to have. He didn’t know that’s why she married him and they ended up going through a bad divorce. And now he has to do a job for her little sister. Calliope was a bit chunkier, with frizzy, curly hair from what he remembered; so he was not expecting the knockout that greeted him. And she is nothing like her sister. She’s sweet and caring, she runs a childcare business, she’s good with kids, people love her. And even though she’s much younger than him and he feels he’s broken he can’t help but to be extremely attracted to her. Like watch-out-the-room-is-on-fire attracted to her. I have a special place in my heart for the Kent brothers so I LOVED this story and can’t wait for the next one to fall! But this one…. droolworthy!

It’s Not Christmas Without You by HelenKay Dimon – 3 Feathers

My least favorite of the anthology but still sweet and entertaining. Carrie and Austin are high school sweethearts. They grew up in West Virginia in a small town so when Carrie wanted to pursue her dreams of working at a prestigious museum and move to the big city. Austin didn’t want to relocate thinking her place was there with him. So they broke up. And Carrie loves him too much to go back home for Christmas, see him, and fall back into bed with him so she decides to stay in the city for the Holidays. But Austin thinks its time she sees where she belongs and opens up a Christmas tree lot outside of her apartment building in the hopes to win her back and bring her back home with him. I didn’t like Austin’s attitude toward Carrie’s work, which was her problem with him. I thought he was a bit of a self-centered ass and it was all about him at the end of the day. Until at the end of the story the lightbulb goes on. I still didn’t feel how they could make things work.

So so cute. Justin has been in love with Claire for over 7 years. But his best friend was the one who made the move first and married her. And two years ago he died in an accident. After that, Justin has been there for Claire, helping her get through it and being her best friend. But it’s so hard to love and lust and have to hide how he really feels. I thought they were perfect together, I just didn’t understand how he wanted her so bad and then he’s the one that says he can’t do it because of his best friend? And she didn’t notice how hot he was until her friend points that out to her? Other than those minor issues for me I enjoyed the story a lot. It was very cute and sweet and sexy.

That does sound like a nice delicious, curl up by the fire holiday read.