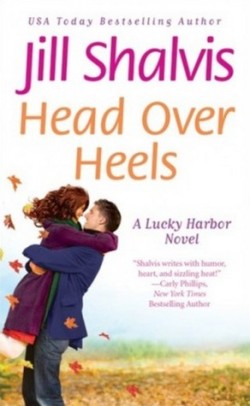 Head Over Heels
by Jill Shalvis

Favorite Quote:
“Chloe?”
“Yeah?”
“I’d be worth the inhaler,” he said, then forced himself to walk away into the night.

Sawyer,
I may not have asthma but you still make my breath hitch.

First things first, if you haven’t read this series already, then I highly suggest you do. Head Over Heels is book three, so go on and grab Simply Irresistible and The Sweetest Thing before you take a ride on the wild side!

Chloe Traeger is known as the “wild child”. Her impulsive antics and stellar personality gets her noticed. And sometimes, her impulsive and slightly law-breaking ways lands her in the hands of Sherriff Sawyer Thompson. Cue swoons. Because it’s a good place to be.

My, my Sawyer is a dream come true. With his cop mentality and barely restrained masculinity, there is no wonder why Chloe couldn’t fight her attraction for the roughened cop. He’s just too good to be true. The chemistry sizzles and Chloe finds herself using her inhaler more than once in the presence of Officer Hottie.

The free-spirited Chloe has spent numerous days in Lucky Harbor now. Though she still travels often, Lucky Harbor has become somewhat of a permanent home for her. She sees her two older sisters settling down and finding love and Chloe can’t help but wonder what will happen to her. “Settling down” isn’t quite in her repertoire, so she feels like she is at a loss. How can anyone as free as Chloe accept and love her for who she is?

Meanwhile, Sawyer has problems of his own. His issues involve his father who he doesn’t have a good relationship with. Believe it or not, but the straight arrow cop was once a hooligan who engaged in careless acts as a teenager. His father hasn’t forgotten that part of his life and reminds him each day as his health deteriorates and Sawyer tries to reach out a helping hand. Instead of accepting it, Nolan Thompson slaps it away, refusing any kind of help from his son. Sawyer regrets his actions, but can do nothing else but live with the choices he’s made.

What’s interesting is the fact that Sawyer and Chloe are polar opposites in everything they do. Sawyer is straight arrow whereas Chloe follows no lines at all. And if she does, she crosses them or blurs them completely. Their relationship has been developing from the first book and I thought Shalvis did a great job of slowly developing their romance. Sawyer isn’t one to simply allow anyone to walk into his life. He’s a guarded man who keeps his feelings to himself. But boy, he’s a potent one once he reveals those emotions.

HEAD OVER HEELS is my favourite book so far in the series. Sawyer and Chloe definitely became my top hero and heroine in Lucky Harbor, so topping them will be hard. However, that is not to say it’s impossible.

I couldn’t resist reading that extra tidbit at the end for the next Lucky Harbor book! Ty sounds like another one I could fall for. I’m pining for this next book already!

I can’t help but wonder who else will be getting a book in the series! Here are my guesses:
Cute Guy – I NEED to know who this man is.
Mark Bowers the Park Ranger – I loved this little walk on moments in HEAD OVER HEELS. Plus, the Park Ranger thing doesn’t seem so far off from Sawyer’s gig. Ergo, he must be a hottie.
Josh the Doctor – I can’t resist a man who can patch me up. 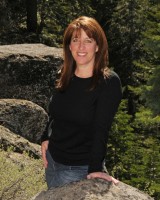 So glad you enjoyed the book! Thanks for the great review. And yes, Mysterious Cute Guy, hottie forest ranger Matt Bowers and sexy ER doc Josh Scott will get their stories next summer. 🙂

I’ve been following your reviews on this series to-date, and you have my interest piqued! Can’t wait to pick these books up. 😀

This really looks like a series I’ll love – can’t wait to read it!

Thanks for the review! I’ve heard such wonderful things all over the blog o’sphere about this series! I just got the combo version of books 1&2 and I can’t wait to start 🙂

Great review! I, too have been reading reviews at various blogs on this series and entering all the giveaways…If I don’t win…Santa’s gonna have to come through for me! 🙂 ‘Cause I really wanna get into this series!

Just ready your review had me hooked. I read the other reviews from earlier, but I think you’re right about the hotter chemistry between this h/h.

Lady D, Di, erin, and Barbara, I hope you enjoy them as much as I have!

Sophia Rose, I didn’t think Sawyer would pull in the steam factor since he’s so reserved but underneath the cop facade he’s got going on, he’s a potent one!

ARC Review: He’s So Fine by Jill Shalvis | Under the Covers Book Blog