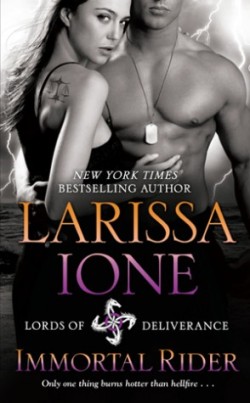 Immortal Rider will take you on a paranormal ride from beginning to end. The action, the scheming with just the right amount of romance. You will not be bored with all the different things waiting for you in the Horsemen world.

Arik Wagner, Runa’s brother, who also works for R-XR has been a good part of the Demonica series (Desire Unchained, specifically). This guy has totally evolved from who he was before. He goes from hating the immortals to working with them and gaining a respect for them. Even going as far as developing a friendship with them.

We have been eagerly anticipating Arik’s book for a long time. Now, the hot human brother finally gets his chance to shine and UTC is finally getting some Arik action!

But it’s really Limos aka Famine, the only female horseman who really gets into the Arik action. Except there is one major thing standing between her chance to be with Arik.

Before she was even born, Limos was promised to the Dark Lord. Being unwillingly betrothed to Satan brings up a lot of problems. But when Arik can’t deny his attraction to Limos any longer, he kisses her. And this is when the story begins its hellride. And we mean, literally.

Just as Arik gets summoned to hell, Limos tells him to never, ever speak her name. If he does while in agony, then Limos will find herself next to her rightful husband.

Arik and Limo sizzle in IMMORTAL RIDER. However, while they were great together, they didn’t have the same feel as Ione’s past romances. We expected some sexual gymnastics that Ione has become known for and although we didn’t get that so much in this instalment, we still felt that the sex scenes fit Limos and Arik well.

Speaking of sizzling chemistry…
Than and Regan’s chemistry was palpable and we really enjoyed their parts of the books. It makes our hands itch for the next one and we’re sensing that Ione will surely deliver another one of her epic stories for the sassy Aegis chick and Death.

What was also fantastic is that Larissa Ione isn’t afraid to put her characters through some bad times in order to tell their story right. Arik and Limos endure a lot of things that would normally break a person. So it was interesting to read about their journey through that as well as see the development of their romance together.

This book was full of unexpected twists, betrayals, lies, some truths and more lies, along with the consequences all that lying cost everyone. Limos has a lot of skeletons in her closet that slowly come out and it’s thanks to Arik’s strength that she can face them. He was her rock throughout some tough moments and we liked that he stood by her even when faced with issues that would’ve made a lesser man turn his back on her. He never took the easy way out.

This series in not to be missed and we highly recommend to any PNR lover.

This ARC was provided to us by Grand Central Publishing.

I have not read this book, but I like what you pointed out about the human being the ‘rock’ and strong one for the gal.

The book sounds great, but I must read the other and the Demonica first. *sigh*

This one’s coming up in my “TBR” shortly. Good review and I personally think a “3” rating is OK. I give quite a few. It means I liked it. I reserve my “5’s” for books I intend to procreate with.

I have enjoyed her books in the past and am looking forward to having this one on my TBR list. Thank you.

I haven’t read any of Larissa’s books before. But I will be putting a few on my wish list. Thank you for pointing me to a new (to me) author.

I’ve been waiting on book 2. I enjoyed your review and like the points you brought up.Can’t wait to read it.
Carol L
Lucky4750 (at) aol (dot) com

I’ve got to try one of Larissa’s books – they have such interesting concepts.

I’ve been wanting to read this series, sounds great!

I haven’t read this series yet.I have only read positive reviews for it along with yours.Great review.

Thanks for the interview, sounds like a really fund paranormal ride.

Reading your review let me know that this is as good as the previous ones. Nice!!

I haven’t had a chance to read this series, and this review really makes me want to go and get them! 🙂

Top of my wishlist! Thanks for the awesome review!

Love Larissa Ione’s books! My first read of hers was ETERNAL RIDER and since then I have read all the Demonica series and LOVED them all! This book was just as great, if not better, than the rest! I loved the relationship between Airk & Limos. And of course learning more about the other siblings and the world. I am really looking forward to reading books 3 & 4 in this series.

I just started this one. I’m so happy Arik got his book. And with Limos, no less. She’s just Satan’s bride. LOL! I’m holding myself to not read this review so I won’t be spoiled 😉

I can’t wait to read this, Eternal Rider was brill!

I am so excited to read this book, thanks for really honest review.

Arik is so hot. I am really happy Larissa did his book. I think he and Limos are a great couple.
Thank you for the review.

I really love LOD series! and this one is awesomeee! to tally love Arik and Limos :3

I haven’t read any in this series, but the review has me looking forward to reading it.

I haven’t started this series yet, but from reading the other, I know it will be just as good.

I can tell from the review though, it’s best to start from the beginning.

Yes, always best to read these in order as there is a continuing storyline

I’ve had this one on my wishlist for since I first saw the cover and read the blurb. Thanks for the giveaway!

I love Larissa’s books and really enjoyed the review. 🙂

I have been eying this one and tomorrow is pay day!!! Love Larissa books, just love them.
Z

love this author’s Demonica series and cannot wait to get into this series as well!

Thank you for the informative review.