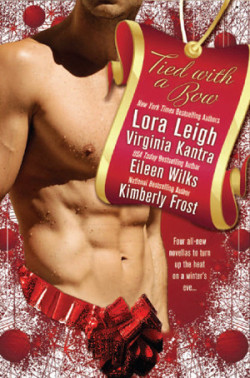 Historical paranormal romance about fallen angels! I found myself actually loving this story. Having never read this author before, I’m lucky this was a prequel to her series Children of the Air. Lucien is an angel who falls for the simple act of looking out for the wellbeing of the daughter of a dying woman. After his fall he doesn’t have his memories of his time as an angel. He is now faced with the decision to marry a wealthy woman so that he can continue doing the good deeds he has taken upon himself. But fate has something different in mind. He ends up spending the Holidays at the house where the girl he fell for was taken in by what was left of her family. Aimee has been treated like Cinderella, she doesn’t anything to offer a husband. But these two destined lovers can’t fight what was always meant to be. And Lucien ends up falling in love with the girl he gave up his wings for.

This is the prequel for the Etherlin series. Kate is a journalist uncovering vampires, who keeps dreaming of a beautiful bronze man until that man lands pretty much in her path while she was skiing. Except he has no memories. He doesn’t remember who he is, they just know he is running from ventala (part vampire, part human) and of course Kate will protect him. As the story progresses and his memories come back, Nathaniel feels the connection with Kate, she is to be his mate. But he doesn’t understand what he has to give up in order to be with her. This was a bit of an ambitious introduction to a complex world in such a short story, which is why it’s only getting 3 stars, but I am very excited to see where this new world will go with All That Bleeds

This is now the second short story I’ve read in the World of the Lupi series and I have yet to read the series. I’ve come to the conclusion I shouldn’t read the novellas for this series anymore because I feel I’m not doing them justice by not knowing the background. That being said, I thought this story was a bit boring. Taking a page from Meet The Parents, it is time for a lupi (shifter) to come into the home of a group of earth magic practitioners. While there, the lupi is not the only threat around and he might be the one to save them all.

Lora Leigh is turning up the heat! This might be one of my favorite novellas in the Breeds series. Malachi was just *puuuurrrrrr* so alpha, determined to have his mate, welcoming of the gift Isabelle was to him. Even though I hadn’t met Malachi before, being that he’s one of the Coyotes, I was more than ready to connect with him and Isabelle as a couple. Sparks where flying before they ever spoke to each other, the fact that she made him hunt her instead of giving in right away to their desires, and when they finally did it was smoking hot! For once we didn’t have a lot of tests at the beginning of the mating, which maybe I thought was a bit strange because Isabelle wasn’t showing the crazy signs of mating all other females have gone through. Rule Breaker and Lawe Justice were also a part of this story in the Breeds general storyline, and I was happy to see Ashley! I’m looking forward to reading her story, but up next Lawe! Can’t wait. After having a few misses this year with other series, Ms. Leigh has given us excellent Breeds stories! This story has a 4 toe curl rating!

Hmm, I love anthologies because you get a snippet of a few authors at once, but the downside is that some authors are not good at short stories.

Thanks for your review!

I love the little short stories in an anthology.