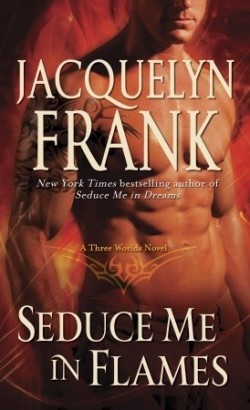 Seduce me in Flames
by Jacquelyn Frank

This book took me by surprise. First, it doesn’t really follow in the storyline of book 1 that much; yes it could pretty much be read as a standalone. Second, we don’t the see much of the Chosen, which were a big part of the first book.Rush “Ender” is HOT! I mean, literally. He’s kept quiet about his mysterious power of burning this, his body overheats, he causes fires, he burns things and people. He’s lived his whole life isolated because of this. Not even his closest friends and teammates for the IM (Interplanetary Militia) know about this.

He is assigned to “save” the princess and heir to the throne of Allay. Princess Ambrea is not your standard royal. She grew up away from court. Her father would’ve preferred she didn’t exist and she was treated that way. Now with her father dead, she needs to be eliminated.

Of course the IM’s job is to police the Three Worlds, and they want a fair chance for Ambrea Vas Allay to make her claim for the throne and ruler of Allay. Rush just needs to break her out of some pretty nasty catacombs, then out of her world and safely into the hands of the IM council.

I liked the fact that in their own way, both characters were strong yet innocent. Yes, they are both virgins, obviously each for their own reasons, but it gave them a sense of comfort.

For all that Ambrea seems like a breakable little girl, she can be strong when she needs to be and go after what she wants (i.e. Rush!)

We didn’t get a lot of sex scenes in this book BUT when we did get it, it went on for what it seemed like forever! Good and bad.

In general I liked this story, it had some action, even though at times it dragged a bit too slow and things became a bit repetitive. As usual, I’m interested in Justice’s story and I was happy to see Ravenna and Bronse as part of this story.

I really liked the first book and was looking forward to this one. Now you got me a little worried, ’cause you’re usually spot on. But…I’m still gonna give it a shot anyway.

I need to read this one! I’ve only read a few of Jacquelyn’s books but I thought they were all great!

Thanks for the review. I haven’t tried this series yet but it looks good!

Thanks for the review! I haven’t read this author but I’m really interested.

I enjoyed the review as I haven’t read this book and was curious. Maybe we should call him ‘Flame’ like in Fantastic Four instead of Rush or not since he’s trying to play it low key. (-;

Thanks for sharing your views on this book! It sounds interesting, I might be picking it up sometime.

I haven’t read this series yet.I’ll have to check it out after I finish the Nightwalker series.Nice review.

Thanks everyone. Hope you enjoy it when you get to read it!

And @Barbara if you liked book 1 then this one is better. I was just ok with book one, so you might enjoy this more.

This was my review of book 1

Great review! I’ve been waffling about reading this one.

Thanks for the review. I’ve had this one on my shelf but just haven’t gotten to it yet.

Great review again hon. I like that this can be read as a standalone, but I prefer to read it in order nonetheless. I can’t help it LOL! Their backstories sound pretty sad and I like that will give them some depth and make me relate to them quicker. I like that the characters are both strong and innocent. Overall, I can’t wait to check this out. May drag a bit, but still Thank you so much for the awesome review 🙂