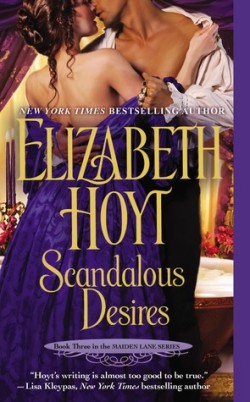 Hoyt’s latest hero, Charming Mickey O’Conner will probably be one of my favourite heroes this year. As a river pirate, Mickey is as dangerous and as cunning as they come. With instincts as sharp as that of a wolf, it’s no wonder why Silence is unnerved by him.
Silence has such a big heart and Mickey uses this knowledge to his advantage. Using her love for his young daughter, Mary Darling, Mickey persuades the widowed Silence to live in his home to protect his child from his enemy, the Vicar.
But as days pass by, Mickey seems to grow more and more fond of Silence until he finds that he will do anything to protect her and his child. However, his enemy is closing in and Mickey finds himself finally questioning himself.
Scandalous Desires is my favourite book by Elizabeth Hoyt. I fell in love with Mickey right off the bat. He had such presence in the book and I thought that Silence complimented him well. She was patient with him where another would have stalked away from him for his ruthless ways. I thought that their love progressed well and while at times I thought some parts were slow, the majority of it was intriguing. With Silence still mourning the death of her husband, William and Mickey not so in tune with his feelings, there were a few rough spots between them that made their romance in the end shine brighter.
But it’s the latter half of the book that really made this book for me. Hoyt takes readers on a little ride as she tugs on those heartstrings after building such great characters and having readers bond with them. It makes the latter half of the book much more entertaining because we fall so hard for the characters.
For readers who follow the series, familiar faces are present. Lord Caire and Temperance appear, along with Winter and some of the other Makepeace brothers. Hero, the heroine of Notorious Pleasures also makes a few appearances.
Needless to say, this book certainly lives up to its hype! I would even go as far and say that Scandalous Desires is Hoyt’s best book so far! I would definitely recommend it!
P.S. Mickey is mine. Sorry everyone.
P.P.S. Isn’t the cover absolutely gorgeous? I’m in cover love!
Favourite Quote:
He let get nearly out of the room before he spoke,” I may not have the right, Silence, me love,” he drawled so soft she nearly didn’t catch the words. “But I would’ve listened to ye. I would’ve believed ye.”

What? Already yours?? You beat me here *sobs*

I think I need to read this ASAP, if you said its good, I know it will be good. We have almost same ratings *grin*

I have not read this author, but you are the second person to give this book a fab review.

I have not heard of a river pirate in the role of hero and that by itself is intriguing.

I hope it won’t offend or incur your jealousy if I check Mickey out for myself. (-;

@Sophia Rose Definitely give this one a shot 🙂 Mickey is great.

I didn’t read too much of the review but I saw the Feather rating…looks good. I put this on hold at my library. you think I will like this Annie?