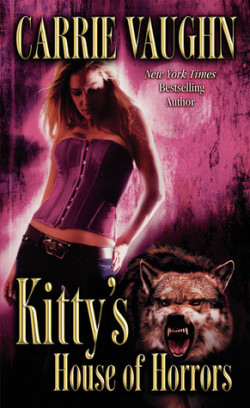 Kitty knows how to get in trouble! I really enjoyed this installment of the Kitty Norville series. Why? Because the storyline was so different from anything I’ve read! Carrie Vaughn manages to keep this series fresh and interesting, throwing scenarios at Kitty that, even though deal with the same general ideas, are still original.So what’s Kitty’s latest mess? She’s always looking for a way to get some media exposure and she’s being offered to participate in a reality show. Put a few supernaturals in a house with one skeptic human and they are supposed to change his beliefs that they’re all full of shit without doing the obvious (ie shifting).

And while Kitty is off by herself trying to stay alive, back on the home front Cormac is actually being released from jail. OMG Finally! You know what I realized with this book? Two things really. The first is that Kitty always thinks of Cormac. Constantly. He keeps her alive through this whole ordeal. What would Cormac do? And the second thing is that I have finally come to terms with the fact that Kitty and Ben love each other. Their relationship will never be the passionate, loving relationship I expect to see in the main couple of a series, not even close to the potential that I still could see between Kitty and Cormac, but if we are never to have that, then I might be ok with Ben by her side. He is loyal and he will protect her. He keeps her grounded.

A new storyline is introduced that I’m sure will resurface in future books, and it has to do with the vampires, so I’m very curious to see where this will lead us. And of course I can’t wait to get to the next book, if nothing else because I can get some Cormac in action! Yeah baby!

I love, love, love this series!!! I’ll admit that I’m more of a Ben fan myself and love seeing their relationship grow in the books. This was a really good read that kept me on my toes the entire time. I’m glad to hear that you enjoyed it so much as well 🙂

This one was actually one of my favorites in the series… though the ones after it kind of lost their spark for me.

I like Ben well enough, but the relationship is pretty dull. And I’ve never gotten over the colossal tease Vaughn created with the Kitty-Cormac dynamic. (I also hate what she goes on to do with Cormac in the post-prison books.)

@Samantha, I guess I just expected Cormac to be the love interest from the beginning which is why Ben has always been the settling choice. But I did enjoy this book, nonetheless!

@Jen, nooooooooooooo you’re scaring me! I have the next one loaded on my ipod to start soon, but I wonder what could’ve been so bad for my Cormac-baby!