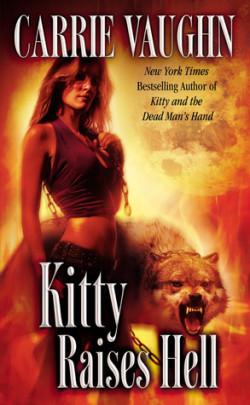 In continuing with the media style unique storylines I have come to expect from Kitty, radio talk show host extraordinaire, in this installment she joins forces with a paranormal reality TV show.Paradox PI is a group of “psychics” and “ghost busters”. They go around haunted houses and track down ghost activity, feel for a presence, etc. When they come to town, Kitty of course wants in on the action. She wants an interview, they want her on the show. What better way than to have the interview live while they work and as their shows gets recorded.

Sounds simple and entertaining, right? But of course, nothing is simple in Kitty’s life. Someone is after her again. This time is an entity that she’ll have to figure out what, who and why wants to harm her, and maybe go through great lengths to protect those she loves. Even if that means dealing with the devil (or vampire, as it may be).

Vampire intrigue, a psychic who uses a ouija board to talk to ghosts, and strangers from Kitty’s past, but sadly, a Cormac sized hole. Although the story was great, I made the grave mistake, apparently, of falling in love with Cormac early on in this series only to have him disappear for a great part of it. Yes, Ben loves Kitty, but sometimes that is not enough for me. We’ll see what craziness Kitty can get into next.