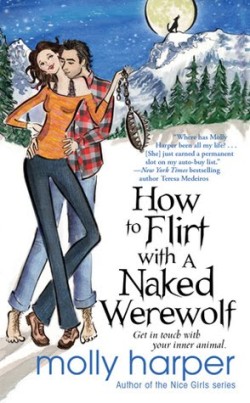 How to Flirt with a Naked Werewolf
by Molly Harper

It’s extremely shallow of me, but what attracted me to this book was the cover. I love a quirky cover and then I was intrigued by the equally quirky blurb and title. I have read Molly Harper before and I do enjoy her blend of the paranormal and humour, and this book was no different.Mo Wenstein has moved to Grundy, Alaska to get away from her interfering hippy parents and start a new life for herself. One particular resident of Grundy, Cooper who happens to be an alpha werewolf in exile, isn’t to pleased about her relocation, even if he can’t seem to keep away from her.

This was one of those reads where you can curl up on the sofa with some chocolate and a cup of tea and escape for a while. It was fun and lighthearted and keeps you laughing. If you want to read a PNR with a lighter bent, then this is the book to pick.

It is told in first person from Mo’s POV, which normally I don’t like unless it is an Urban Fantasy, but I found I loved to camp out in Mo’s head and see what she was thinking, this book is choc full of funny and witty quotes. As for Cooper, I did like him, he was cute and gruff and a little bit sulky at times, which I found kind of sweet, but he wasn’t someone who made me drool. However, Mo and Cooper did make a good couple, I loved that Mo didn’t take any of his BS and also that she took the werewolf thing in her stride, in fact she took it a little too well and figured it out really quickly.

There was also a plot of a wolf attacking citizens of Grundy, which Cooper thought was him as the the only werewolf in town, but I thought it was fairly easy to figure out who was doing it, so I thought that part of the book was weak. But, what was good was that although this is a romance book, it focused equally on how Mo settled in to the town and the other people she built relationships with as well as Cooper.

A great read, and I can’t wait to get stuck into the next one.

4Flamming feathers? cool! I do like the cover as well! looks fun! Great review babe.

I don’t primarily read this genre, but that title made me take a closer look :0) It sounds fun and I might have to add this one to my reading pile. Great review, thanks!

This sounds fun and a nice read to break up something darker and heavier like those things to ‘cleanse the palette’ between courses.

I have always wanted to travel to Alaska so that part sparks my interest too.

I really enjoyed this book. I need to read the 2nd one soon.