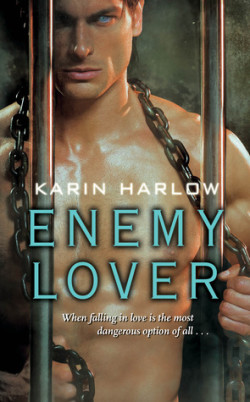 Ex-cop Angela Giacomelli ‘s life is going to limited to a small prisn cell. En route to her new home, she gets an unexpected surprise when an ambush takes her down an unfamiliar path, right into the arms of an organization called L.O.S.T – Last Option Special Team.

I absolutely loved this book! There were so many good things about it. First off, Harlow writes such compelling characters. Angela has her own demons to deal with. It’s her past that has made her a mouthy, take-no-shit woman who isn’t afraid of a brawl if needed. But instead, the L.O.S.T. don’t want to tame the wild Angela. They want her part of their team. This time, they allow her time to hone her skills as a cop and develop new ones to make her the new and improved Jax Cassidy.

Jax simply kicked ass. I loved her as a heroine and she was so smart throughout her entire operations while still being vulnerable and sexy. Then there’s Marcus Cross, who is the ultimate dream for the females. He’s got some military background, but it’s not his hard body and military mind that makes him stand out, it’s his supernatural strength and his ability to disappear at will that makes him the best.

The Godfather, who is the leader of L.O.S.T was also a great character. I’m very interested to read more of the other guys such as Dante, and mostly Gage Stone. He’s amazing and if Jax doesn’t want him, I’ll take him.

I loved the politics involved in the plot. The action was great, keeping me on the edge of my seat. This certainly isn’t your average paranormal romance. It kind of reminds me of Pamela Clare’s I-Team, with all the suspense with a touch of paranormal to make it that much more entertaining. Harlow should start a new romantic suspense series. I’d read it!!

I understand that this is part of a series. Can I read this book as a stand alone or will I be lost? I actually have it on my shelf but I’ve been shy to read it due to it being a series.

Michelle, this book is the first in the series, so go ahead and start it. Harlow has just released the second book, Enemy Mine a few months back.So the series is just taking off 🙂

Oh sweet thanks! I won it in a blog hop and it has just been sitting there. Great review and incentive to pick it up!

Great review.I have this book in my TBR pile.It sounds like such a good book.

We need to read these in order right?

Hi Megan, Definitely read in order. There’s only two books out so far so it shouldn’t be tough to do.

Wow! This book sounds like an action romance movie. Definitely something I want to read:) Great review!

OOOOOH. Thanks for the great review! I just got this book and I’m especially eager to read it now!

I love Pamela Clare’s I-Team series so I’ll definitely add this series to my To Read list! Thanks!

Thank you, Annie for having me as your guest today! So glad you enjoyed ENEMY LOVER. I miss Jax and Marcus!

To everyone who stopped by and commented, thank you. I’d love to hear from you if you have a chance to read either ENEMY LOVER or ENEMY MINE!

I haven’t read this series yet and I like the idea of the introduction to an author’s fantasy world is heavier on the characters and the plot than on the world itself.

And hey, the reference to the A-Team sold me- loved that series years ago. (-;

Thanks for the review. It makes me want to move up this series on my TBR list.

Thanks for the review, I would not have picked up on this book, if I hadn’t seen the review.