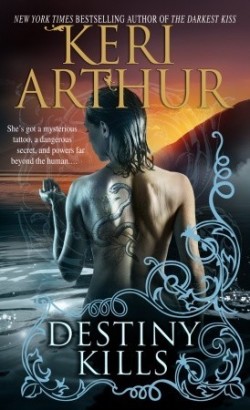 It’s Nessie, the Loch Ness Monster! Or Destiny, the sea dragon who just escaped a bunch of bad scientists who had discovered the world of dragons and kept her captive (along with her mother, and other dragons) for over 10 years.

Born of a sea dragon mother and a fire dragon father, Destiny had left her home in search of her mother who had disappeared, leaving behind her sick father. Except she gets captured by the same people who took her mother. While in captivity she builds somewhat of a relationship with a fire dragon, and after 10 years they manage to escape together.

While traveling back to her father, who is about to die, her traveling companion and sort of boyfriend is killed and she is left to trust his brother, Trae.

So Trae is pretty likeable. He’s sneaky, he has his own agenda with valid issues, but he knows when to recognize he has found his one true life mate.

Destiny was just ok for me. She seemed to have the oddest reactions to things at the most inappropriate times, which maybe was supposed to be part of the story but just left me thinking “Really? Now? Are you serious?”

However, Trae and Destiny are pretty good together and I was happy to see a difference between this series and Keri Arthur’s Riley Jensen series. There is a HEA at the end of this book people! I was not expecting that.

I’m very interested to keep reading about this world, with the different kinds of dragons. The ending was a bit cheasy for me and in general the story moved a little slow, but we did get some action, as well as a visit to Scotland. Yes, the place where the dragons where being held was Loch Ness, which probably accounts for the human tales of Nessie. I thought that was extremely cute!

I am in no rush to get to book two, but I will definitely be reading it.

Wasn’t sure what I thought of this the first time reading but I have re-read and decided that’s it’s a keeper especially paired with Mercy Burns since you get more details about their world!

Under the Covers Book Blog
Admin
Reply to  Anastasia Miller

I have to get to Mercy Burns hopefully soon. Glad there’s even more info on the world!