Join our newsletter to be the first to hear our latest news! Learn More
Home / Reviews / Review: Blood Work by Kim Harrison 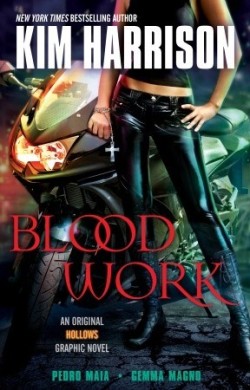 Blood Work is the first graphic novel in The Hollows series. I know people have mixed feelings about this as it can be frustrating to see your favorite characters not portrayed the way you envisioned them. But I’m usually excited to see them come to life one way or another so when I had the chance to get my hands on this at NY Comic Con I was extremely happy. It’s been sitting on my desk now for a few weeks and imagine my surprise when I opened it yesterday to read it and I realized IT’S A SIGNED COPY!!!!! After my happy dance… here are my thoughts.The story in Blood Work is a prequel to The Hollows Book 1 Dead Witch Walking. It basically tells the stoy of how Ivy and Rachel came to work together. This is also told from Ivy’s perspective. Basically Ivy set up her previous boss to get blamed for a murder and got kicked out of the homicide division of the IS. She feels she’s already at a low point in her life and then she gets assigned Rachel as a partner. What could be more denigrating for a vampire than having a witch for a partner. And it doesn’t help that Rachel doesn’t know how to dress and acts the part of a ditz. They stumbled upon a murdered were and even though they shouldn’t be investigating this case, they manage to figure things out and give Ivy her first taste for the hunt.

As usual, I loved Rachel and Ivy, and I enjoyed being in Ivy’s head, where in the books, I wasn’t too crazy about her at the beginning. A bit of a touchy subject for me, Kisten is still dating Ivy in this story. I might’ve cried a little, but I can guarantee you that was something that must’ve gotten in my eye, not Kisten. Not at all.

At the end of the novel we have a quick glimpse of how the graphic novel came together. There’s a long character description and profile that Ms. Harrison had given the artist, and also the initial sketches for the characters and the revisions they went through.

I loved Ivy. She was my favorite graphic representation. Almost exactly how I pictured her. She just has so much raw sexuality, like a vampire should. Her aura was also pretty good. Rachel on the other hand, at times I liked the graphic representation and at times I didn’t. My main problem with how the character turned out was Kisten. Where’s his sexy persona that a vampire should have? And that’s NOT how I pictured him at all! Hmmmm I guess we can’t have it all the way we want.

In the end, for a Hollows fan, I think this will be an enjoyable read. It was actually a pretty long graphic novel so I found it worth the money.

For someone who has never read the series… I’m not sure the novel does a good job at explaining the world enough, or if you might be a little lost if you pick this up. However, the general storyline is easy to follow, even if I’m thinking you’re missing background info you will still enjoy it and understand it. It might actually be a good taste of what the series has to offer. Just keep in mind, the books are from Rachel’s perspective, and she’s very entertaining!

Awesome review! I love the Hollows series and did not even know there was a graphic novel out there. Definitely going to be picking that up soon!

Thanks Jamie! Hope you enjoy it!

I appreciate what you said about this prequel graphic novel about POV and the illustrations. Good to know what one is getting if they must always order on line as I do.

I have only read one other graphic novel that was an urban fantasy and also a prequel. I was a little nervous to see my favorite characters visualized.

I’ve yet to read it but do I have a copy. I think I’ve always thought of graphic novels and movies from books as the lazy person’s alternative to actually reading a good book. I can’t imagine compressing the story and looking at drawings will satisfy my need to see the world built in my head as I spend hours and hours reading a great book. But we’ll see.

Yeah, it’s never the same as reading the actual book! But it was fun even though I didn’t think all characters were portrayed how I saw them. They will always look the way they’re supposed to in my head. Hope you enjoy it!

[…] you had the chance to read the first graphic novel for The Hollows, BLOOD WORK, you will know that these glimpses into the series are told from Ivy’s POV.  Also an […]