Join our newsletter to be the first to hear our latest news! Learn More
Home / Interviews / Interview and Giveaway with Alyssa Day!

Keeping things rolling with UTC After Dark, we have New York Times and Bestselling author Alyssa Day with us! Before we get into the interview though, please send your birthday wishes to Alyssa since TODAY IS HER BIRTHDAY!!! Under the Covers sends their wishes your way! Happy Birthday, Ms. Day! Thank you for spending your day with us! 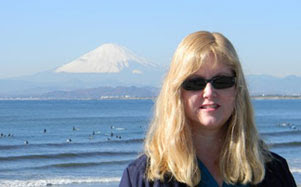 Thank you for being a part of UTC After Dark!

Thank you for inviting me! It’s lovely to be here.
What does a day in the life of Alyssa Day look like?
Right now, it’s kind of crazy.  I’m living in Japan with my Navy Guy  husband and our family (and pug Daisy!) and any given day can find us traveling to a 450-year old castle, exploring Buddhist temples, or just staying at home and trying to keep the work and schoolwork rolling along.

Can you tell us a bit about your most recent release, Vampire in Atlantis?

Ah, my lovely, tortured Daniel.  He’s an 11,000 year old vampire who has given up on life and is ready to face the dawn–and his own death–until a quirk of a magical portal transports him to Atlantis.  There he finds the only woman he truly loved and is shocked to find her alive!  He thought she died when Atlantis first dove under the oceans all those millennia ago.  Serai is a very determined, very magically powerful Atlantean princess and between the two of them, they must rescue the sleeping princesses, slay the evil vampire (or is he really evil?) and discover a lost jewel of Poseidon’s Trident.  It’s a crazy thrill ride of a book and maybe my most emotional one yet.
What can readers expect next in the Warriors of Poseidon series?
Finally! Heart of Atlantis! Finally!  I have to say “finally” since most of my readers have been waiting for High Priest Alaric’s book since the very first book, ATLANTIS RISING, came out in March of 2007!  This one is insane.  Absolutely a nail-biter of a book wrapped around a world-ending kind of love story.

Who is your favourite author and what is it about their work that resonates with you?
I have too many favourites to even begin to list.  My most recent reads, as I check my iPad and Kindle and library book stack, are, in no particular order:
A Tree Grows in Brooklyn (introducing my daughter to this amazing book); the new biography of Steve Jobs; Condoleeza Rice’s memoir, No Higher Honor; several books about Norse mythology; the children of Henry VIII by Alison Weir; a history of the Borgias, for my upcoming LEAGUE OF THE BLACK SWAN series; The True Path of the Ninja; and I’m going to start a CJ Box novel my librarian recommended when I finish the book I’m writing right now.
What would you consider essential elements of a good story?
Conflict, conflict, conflict.  Characterization that grabs you by the gut and won’t let you go.  A world that draws you in and makes you want to return.
The mythology of Atlantis has intrigued many in paranormal romance. What was it about the myths that captured your interests?
Everything!  I’ve wanted to discover a lost city since I was a child; I nearly went for archaeology in college, but decided to write about it instead.

Your worldbuilding is exceptional! How do you make readers believe in the world you have created? What are some of the challenges?

Thank you!!  The key to paranormal fiction, I believe, is to make very sure that the rest of your story is as accurate and truthful as possible.  You’re already asking readers to suspend disbelief that there are vampires and Atlanteans running around; you don’t want them to lose faith in you by putting the fort in St. Augustine, florida, in the wrong part of the city, or describing ancient Aztec rituals and getting them wrong.  When I say “truthful,” I mean truthful with the emotions–the heart of the story.  I reach into my own life and heart to reveal the truth, no matter how painful, of what love lost and defied feels like.

Fun questions! If you could collaborate with another author, who would you pick and why?

I’ve tried that before and learned that it’s just not for me.  But if, in my imaginary world, I were not such an obsessive control freak, I would collaborate with Eileen Rendahl and my Atlanteans would visit her Messenger and solve a case together.  You should totally check out her incredible urban fantasy series at http://www.eileenrendahl.com/.
If you could drop your characters into another author’s world, who would you pick and why?
My Atlantean warriors might send some warrior trainees into a zombie world like The Walking Dead.  They could help the remaining humans and get in some great sword practice!

Of ANY book character, who would you want to have a date with?

My husband and I have a firm rule that we don’t date other people.  It’s just better for our marriage.
Thank you so much for inviting me!  What a nice place to hang out on my birthday (well, sort of–it’s 14 hours ahead of New York here near Tokyo).  It’s kind of like having 2 days of birthday!
Thank you again for stopping by, Ms. Day! If you’re interested in Alyssa Day’s work, please visit her website here for updates on her books!

The most unexpected of all allies to Poseidon’s warriors has proven to be the fiercest-Daniel, a vampire and Night Guild mage. But even the strongest alliance can be destroyed when a vampire’s oath crosses paths with a maiden’s quest, and an eleven-thousand-year-old desire is reborn.

To enter, please:
1. Be a follower of this blog
2. Fill out the form below

Oh how exciting! Alyssa Day is one of my favorites, and she was one of my very first PNR reads 🙂

Oh I love books about Norse mythology also. TY Ayssa Day for doing this interview. I love to hear from the arthur’s. This book sounds great. TY for the giveaway chance.
sacredmoon(at)gmail(dot)com

I love Alyssa, her books you can devour in no time and I agree her worldbuilding is fantastic.

I can’t wait for Alaric’s book, I am one that has been waiting since he was introduced in the first book.

I forgot to say Happy Birthday as well. Hope you had a fantastic day

Happy B-Day Alyssa, I love your Altanian Warriors. Hope you have a great birthday. Great Interview and thanks for the giveaway.

Awesome! tahk you for the giveaway ^^
HApy birthday again Alyssa ^^

This book sounds amazing and happy bday! LOL mine was 3 days ago 🙂

Happy birthday, Alyssa! I love your novel’s book jacket!! Haha. Thanks for the giveaway!

Never read Alyssa’s book before, but I’d love to. Hope I can read one of your book soon.

Great interview and thank u for the giveaway.

Happy Birthday, Alyssa. What an interesting interview – Alyssa, you are very lucky to have a chance to live abroad with your family.

Happy Birthday! Great interview. I love stories about mythology and legends, so I can’t wait to read it. Thanks for the chance.

Happy birthday. Wow, you get to live in Japan and write these great books, how lucky are you? I love this series, thank you for writing it.

Happy Birthday Alyssa! I didn’t know you were living in Japan, what an interesting place to live. I always love the various stories and mythology surrounding Atlantis too, and yours are no exception, thanks for the interview and the contest! Book Savvy Babe

I just have to say I’m glad you and fam bam are good after the wholle tsunami tragedy. I was followin you on twitter.
That was scary, glad you’re okay!!!!

So, recently learned, you book are also on audio!!! Super excited to get to them. Covers are haaawwwt!

I haven’t had the pleasure of reading any of Ms. Day’s books but they sound awesome! Thanks for the lovely interview and giveaway and I definitely have this author on my wishlist 🙂

I love finding out an author’s background and how it relates to their story making. And yeah, a new Atlantis book.

Mythology has always fascinated me – there must be some basis for the stories in fact.

You are a new to me author and I would love to try this series. I agree with the conflict thing. It is surprising how many PNR books don’t really put enough effort into setting up believable conflict.

Happy Birthday! I got to admit if there was one fictional world I could visit, it would be Atlantis. Toss if my favorite paranormal, vamps, and you have totally hooked this PR reader. Can’t wait to read this next book. This series is awesome!

Loved the interview. Sounds like my kind of book. I am putting this on my wish list.
Thank you for the chance to win!

Great interview! This sounds like a awesome book in the series.

Thank you for the chance.

This book sounds great! I haven’t read any of her books but she is going on my list. Thanks for the chance.

I love the idea of setting a series in Atlantis. This series has been on my wish list. Thanks for the giveaway.
jepebATverizonDOTnet

I love all books about Atlantis, and I have added this book to that list! It sounds like a really good one and I can’t wait to read it 🙂 Thanks for the awesome interview and giveaway!

I love this cover and I would love to get my hands on this. Thanks for the giveaway.

Hi! Alyssa Day is a new to me author but I love PNR and mythology. I would love to read this book. Thank you for the chance to win a copy.
June M.

Very interesting review! Nice to meet you, Alyssa. Your life in Japan sounds very exciting. Your respone to this question, “What would you consider essential elements of a good story? Answer:
Conflict, conflict, conflict.”, totally hooked me. Loved the interview:)

Happy Belated Birthday Alyssa! May all your dreams and wishes come true

I loved the interview.

Can’t wait to have it over here in Germany. I love the Poseidon warriors and the whole Atlantis saga! So excited to read about Daniel finally and Alaric of course!

Great interview. Happy Birthday. Thanks for the giveaway.

Happy Birthday. This sounds like an awesome series, i love a good emotional romance. Will be checking these books out!!

Now I really want to read the book. Ty for a great interview.

i love her books!! such a unique storyline too.. thanks for the chance to win..