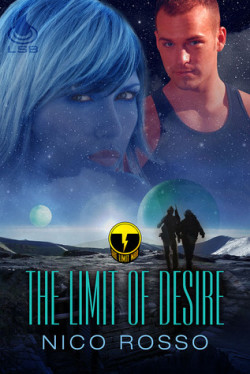 The Limit of Desire
by Nico Rosso

Under the Covers is participating in the Giveaway Hop hosted by I am a Reader, Not a Writer and Tristi Pinkston. This giveaway will run from November 8 – November 11. Please make sure you visit other participating sites during this awesome event by clicking on the giveaway graphic above! And now….

This is the third book in the Limit Wars series. I’m going in blind as I have not read the previous stories, however I was not totally lost. The author did a pretty good job at explaining the particulars of the world I found myself in as we went along without dragging on the story.

Who would’ve thought you could have a book so action-packed. It starts off from page 1 and doesn’t stop pretty much until the end. Kinda like a good military action movie, but without “humans”.

Even though the book centered around a main couple, and there was some relationship building, it was all weaved in through all the action of the Limit War. I found this a bit distracting at times. I wish they would’ve gotten a break at some point, as unrealistic as that would probably be in their situation. But you know how in books the couples always find time and a deserted place where they can get freaky during a battle? Well, that was missing here.

Captain Jessa Tok is a tough chick. She knows what she’s doing, she’s strong, she’s had to be to get to where she is today. Sergeant Ryder Hiltop is part of her team, and the man she had an affair while on vacation. She’s stayed away from him after returning to duty but now he’s ready to make her face the feelings between each other. His plans get interrupted when they’re attacked and Jessa is missing.

The one man rescue operation is successful but from there there’s nothing but obstacles for them to overcome.

I liked both characters. I have to admit that as I was reading, everytime I read Jessa’s pale blue skin description I had that song by Eiffel 65 stuck in my head (I’m Blue) so that has become the soundtrack to this story for me! Just enough romance but light on the steam and plenty action, it was a fun quick read!

Fresh off the press!  Nico is giving away an ebook copy his latest release in his Limit Wars series: The Limit of Desire.  This book just came out yesterday!  To enter all you have to do is:
1. Be a follower of this blog
2. Fill out the form below.

And don’t forget that we have a lot of other ongoing giveaways that will run all month, see the top of the blog under Current Giveaways to enter.

Nico Rosso has writing in his blood. He comes from a family of writers and learned quickly that there are stories going on all around us. With inspiration ranging from 1930s pulp comics to the disco-laced space epics of the Seventies to the high-concept films of the Eighties, Nico always found Sci-fi to be a fertile genre for grand action, strong heroes, dynamic heroines and exotic settings. He hopes you enjoy the journey with him.

The great thing about writing Sci-fi romance is the freedom to explore the relationship between the hero and heroine. Yes, the worlds and technologies and different alien races need to be well-defined and interesting, but the emotions also get their full due. Because of this, the heroes can be extra heroic, the heroines can be powerfully strong and together they can take on any threat in the universe. We can be the rescuer and the rescued, the fighter and the philosopher. It is fantasy on a grand scale, but all the while it is as familiar as our own hearts.

Thanks for the review! This series sounds sooo interesting! going over to add them on my Amazon wishlist!

The constant action reminded me of watching the original Indiana Jones movie where he fell asleep on her in their private moment. I love action adventures with some romance.

Thanks for the view.

The series sounds awesome!! Thanks for the great rundown!!

Cool review. This series sounds cool. I like that there is non-stop action. Thanks for the chance.

Blue skin just takes me right to the Smurfs but sounds so much more action driven.

Thanks for the review. It sounds like an interesting series.