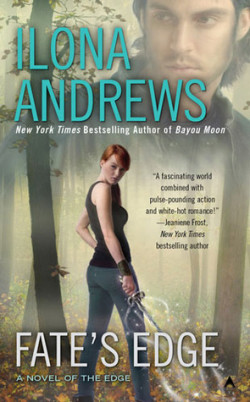 While FATE’S EDGE is really the third book in The Edge series, it was my first delve into this alternate world of The Weird, the Broken and The Edge. Though I worried that I would be lost entering in the middle of a series, I soon found out that I had no reason to be. The writing team of Ilona Andrews may create a vastly unique and complex world, but they are considerate enough to add in a few details here and there for new readers who would like to try this series out. In the end, I got hooked and found myself reading this book nonstop until I flipped that last page.

FATE’S EDGE is Kaldar Mar’s book. He’s what I would call a smooth criminal. Not above using his charisma and good looks to his advantage, Kaldar can charm anyone into doing what he wants.

“This man was a rogue, not because circumstances forced him to be a criminal but because he was born that way. He was probably conning his mother out of her milk the moment he could grin. He’d charm the clothes off a virgin in twenty minutes. And if the poor took him home, he’d drink her dad under the table, beguile her mother, charm her grandparents, and treat the girl to a night she’d never forget.”

Now a member of the Mirror, Kaldar has the means to exact the revenge he seeks. However, his lines become tangled in Audrey Callahan’s life…

Audrey came from a family of grifters and is very much aware of the consequences of that. When her drug-addicted brother gets into trouble again, her father comes to her seeking assistance on one last heist. Audrey refuses outright, but persistence can be a damned thing and when she and her father agree on one condition, she accepts. If she does this one last job, she will have no ties to her family any more. She has no father, no mother and definitely no brother.

With Audrey’s magical skill in lock picking, the heist goes on smoothly. Except now, Audrey learns that the diffuser bracelets she stole are being sought out by both the Mirror and the Hand. And now, Kaldar needs her help to retrieve them.

First off, I loved the con storyline! It was smart, interesting and created the perfect pathway for the hero and heroine to fall in love. Actually, I found that Kaldar and Audrey were very much the same. They were so in tune with one another that working as a team was a dream. I don’t think Kaldar expected things to run so smoothly because the former rogue really falls hard in this one and it was very enjoyable to read.

The kids, Jack the changeling and George the necromancer, were also great additions to this book. I’m sensing that a book will be in store for them, maybe? The presence of these kids really changed the book. They added humor and heart and they made what was once a bunch of misfits, a team in the end.

So if you’re a fan of urban fantasy romance, then be sure to check out The Edge series. Not only is there a happy ending, but there’s a slick hero –made all the more sexy because he knows it – and an equally quick-witted heroine who keeps him on his toes. As Audrey and Kaldar seek to retrieve the stolen item, they find love in each other in the process as well.

I like that ‘met your match’ premise while the h/h have to work together.

This definitely had that in it! Enjoy!

I can’t wait for this to come out! I have loved every one of the Edge series books and read each in a 1 day sitting 🙂

I can’t wait for this book to come out. I bought Magic Graves, even though I already had that novella in another Anthology just to get ahold of the first chapter of Fate’s Edge. Can’t wait until the 29th!

Enjoy guys! I really, really loved this one!!! Not too far away now!

Seriously can’t wait to read this one!! Seriously!!!

I’m really looking forward to reading Fate’s Edge, a couple of weeks ago I was still skeptical for some reason, I don’t really know why, but uhm yeah I’ll have to read this.
Will you read the previous books in the series now too? ^^

It’s a great one, Anya! Enjoy!

And yes, I will be reading the rest of the series. I already have them in fact. I’m excited 😀

Oooh..I hope George and Jack get books one day…I love them 🙂

Romance Rewind: Pulling You Over the Edge - Under the Covers Book Blog