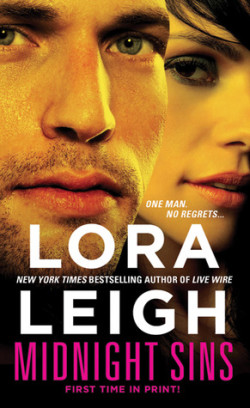 Arrrgggghhhhhh! Do you know how frustrating it is to read a new book by an author you’ve usually liked and when you finish all you can think is: It was aiiiight?!!??This is the second book this year by Ms. Leigh that leaves me feeling like that. Was it bad? No. It was just a bit of a slow mess. And I also felt a bit of recycled plots. Not as a whole, but I felt at times like I was reading a Men of August book.

Rafer Callahan is one 3 cousins that have been the target of the whole small town they live in their whole lives. Their parents were killed in an accident when they were young and their uncle takes them in and raises them. But their grandfathers are out to get them, have been since forever, and have always turned the town against them. Everyone is always scared to be friends with them or their business would suffer. Same goes for dating. No one ever wants to admit to dating one of them.

Cami has been in love with Rafer since she was a teenager and at the time he was sorta dating her sister. But then her sister gets killed and Rafer was accused. Of course he proves his innocence and a serial killer is found to blame. After that Rafer and his cousins left town, went in the military. But that didn’t keep Cami away. She met up with Rafer a few times, gave him her virginity (shocker!) and then she stopped going after him.

Now the cousins are back in town and ready to take on their relatives. And Rafer is determined to get Cami back in his life. Except there’s a detour thrown in when, after Cami and Rafer rekindle their love affair, she gets targeted by a killer who is leaving the same trail as her sisters killer had.

The steam factor you ask? It IS Lora Leigh. She can do no wrong as far as that is concerned and this book is pretty steamy and hot and sweaty and… you get the point, right?

As for the killer? We get part of the resolution in this book, but it will obviously be an ongoing issue on who is really out to get the cousins. As always, I’m interested in the next book. What we hear from Logan and the neighbor sounds promising. Fingers crossed that the execution will be more catching than this one!

I know the feeling!

I have to agree with you for the most part. As a huge Lora Leigh fan this series was a very large disappointmemt to me. From the first book this series was riddle with editing errors, name changes and just errors in the telling of the story. I spent more time looking back at pages already read to try to figure out what I was currently reading. If not for the fact that I have most of Ms. Leigh’s books and have enjoyed them I would have given up kn this series after the 5th chapter in book 1. But… Read more »