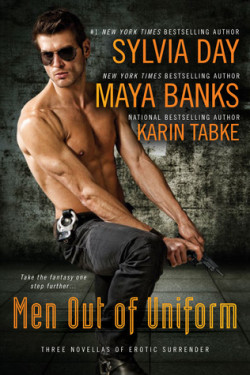 Now who doesn’t love a hot men out of uniform? Especially if they’re Paul Marron!! This cover caught my eye a while back and I’ve been waiting for it to release since.Soul Possession by Maya Banks
3 FeathersMaya Banks is a favorite author of mine, which is why I’m surprised I didn’t connect with this story as much as I thought I would. Don’t get me wrong it was hot, and the plot is ok, but there was no connection for me with the characters.We have Jessie Callahan, a waitress at a bar where two HOT cops have been hanging out for a while now. Rick and Truitt are partners and when they first see Jessie they’re both extremely attracted to her. So they decide to share her and they’ve been trying for a long time now to flirt and get her to go home with both of them.

Things come to a head when she gets fired, they have one HOT night together, and then everything goes to hell. Someone turns up dead, there’s a serial killer on the loose, and Truitt and Rick decide they want to be in a relationship with her, yes, at the same time.

I didn’t like the resolution of the serial killer story, it felt a bit rushed and incomplete. The sex is as usual hot, obviously be prepared for menage, and everything it entails. 😉 Steamy, and it worked for me!

This was my favorite story of this anthology. Don’t ask me why, but it was extremely hot, sensual, the characters worked well together. I think especially because they had a history together. One thing I didn’t necessarily get was how it was so difficult for him to find her all those years ago when he was supposedly in love.

So Sophia gives her virginity to Colin, the popular jock, the night of his graduation. She’s been in love with him forever. After that her family gets threatened and she has to marry a mobster and pretty much has disappeared since. But she never forgot Colin.

Now she’s on the run from her husband, who has a price on her head so she won’t testify against him. Colin, a detective now, is sent to escort her back to New York so she can testify an din the meantime has to protect her.

There’s enough action in this book, and both kinds of it. Very steamy… on the floor, in the bathtub, on the bed. Everywhere!

Layla Creed is in the witness protection program because she has to testify to bring down a cartel. On a recent trip to Mexico with her friend, they ran into trouble and where in the middle of cartel business.

After an attempt on her life she ends up with a most unexpected person protecting her. Brian Simmons. Her brothers best friend and the man she fell in love with at 16. He is also the man she left because she couldn’t deal with him putting his life in danger for his career.

Brian has never let go of his love for Layla and now wants nothing but keep her with him, but first he will have to keep her safe from some very important people that need her dead.

These two have chemistry. They know each others’ bodies very well and from the get-go they knew and accepted the fact that while he’s protecting her they would be together.

I wish I had read some other Shadow Stalkers books as I would’ve liked some background into other characters we see in this book, but the main one I liked was Rachel, and how she showed Layla how she could be ok with being with Brian, dangerous career and all.

Another hot story with a little bit less action during the whole story, but plenty of it under the covers.

I’m a Karin Tabke fanatic; reason #1 for purchasing this book. Reason #2, Paul Marron. I’ll be getting around to this hopefully before the year is out. The TBR is about to teeter over!

Sylvia Day has become one of my “Go To” authors when I want a gripping story that pulls me in completely. Great review.

Men in uniform have always made me drool, I’m sure this collection will only add to my theory that they make excellent lovers as well!

Awww. I’m not a fan of RS but I was looking forward to reading this book. And my girl Banks only got 3 ★’s? *Lethal pouts* I’m still going to read this book but I’m preparing myself for a little fail.

I love anthologies, I find it is a great way to discover authors. And this one sounds yummy! Can’t wait to read it.

I haven’t read these authors yet, but those are pretty good reviews. I love to try new authors in an anthology to get a feel for their style.
sallans d at yahoo dot com

I hear so many readers said Karin Tabke’s story is the best. I will definitely looking forward to read this (beside I want to licking that cover too :P~)

Thanks everyone! Hope you all enjoy it when you get to it. And yes, look at the cover!

Great review Fran. I cannot wait to get to this book. 🙂

Thanks! Twice?!?! Wow! But that is a nice cover *waggles eyebrows*