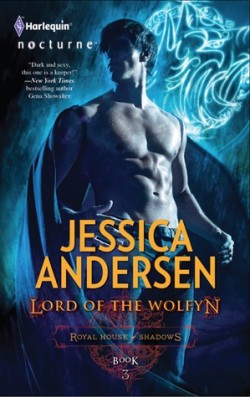 Lord of the Wolfyn
by Jessica Andersen

You know not to judge a book by its cover but…the cover, how do you judge? Francesca: DE.LICK.CIOUS! All that delicious chest, and the colors are really pretty as well. Wouldn’t mind curling in bed with him at night, I mean with the book of course!

Suzanne: LOVE. IT. I would get this book for the cover alone. I know BAD Suzanne, but have you seen that gorgeous man chest. I am not saying that I would lick the cover, but I am just warning don’t be surprised if it is a little damp LMAO!

What did you think about the main characters?Francesca: Dayn is like a little lost puppy. He feels he betrayed his family by not being there but he wants to redeem himself by going back and rescuing them! Not the tough guy, but the do-good one. I liked him.  Reda to me was an insecure woman trying to fit in the shoes of a tough chick. She had the job as a cop, she has a mission in life which she thought was always a made up story, but then she doesn’t have the guts to back up that role. I mean, she almost ended up as plant food!

Suzanne: I liked Dayn he was one sexy shapeshifter (my faves!) I wouldn’t say he was my favourite, but I liked his dedication to his Kingdom and his siblings, as well his super hawtness. But Reda…her constant changing her mind about things irritated me, one moment she was certain of one truth and 10 pages later it was something else! I hate indecisiveness!

Francesca: I liked the play on the fairytale, I think it was done nicely. I liked that Dayn was part wolfyn when in his own land he was the enemy, and I liked Dayn’s possessive instincts about Reda. I also liked the Blood Sorcerer storyline, which we get to see more of in this book.

Suzanne: I liked the continuation of the story about getting rid of the Blood Sorcerer and the idea of the Wolfyn and I can’t wait to see what happens next!

What do you think could have been better?

Francesca: The story flowed really slow to me. I think maybe if it would’ve picked up the pace a little would’ve been more catching.

Suzanne: For me the story was missing something, it was a little slow and I found Reda a little annoying. It also seemed to end rather abruptly as well, but this seems to have happened in all three of them so far.

Series so far, what do you think?
Francesca:
I like the fairytale concept and how each book talks about a different fairytale redone. Would I say this is a favorite series of mine? No. But it’s definitely something different and well written.

Suzanne: Like Fran I liked the fairytale concept it is something different, but I am just not really “in” to this series as much as I would like to be, it feels to disconnected. But I am looking forward to the next book!

omg this is the thing that I don’t like about adult romance books. they are awesome, I’ll be the first to admit it. But the character on the cover, is always nearly naked. Meaning, I can’t take that book out to read with me. To school, or work, or anywhere lol.

Well that’s one of the reasons I love Kindle and e Books. No one can see what I’m reading! Yes mostly all romances, paranormal or not are mostly nude covers or at the very least showing allot of skin (though I’m certainly not complaining one bit.) Awesome review TY will add to my-reading list on good-reads. Cheers!!
DeAnna
sacredmoon1(at)gmail(dot)com

The review is helpful in knowing what to expect once one is past such a distractable cover (-;

I love the fairytale/wolf idea and look forward to checking the book out for myself.

i love the concept, i din’t know this serie until your review so i’m really happy to discover it

I love fairytales!!!!
And I agee with Suz, I would but this book kust for the cover. Lol

i have the first 2 books waiting to be read on my kindle – i am keeping them all until they are all released, then i will sit down and read them all at once 🙂

Can’t wait to read this and the rest of the house of shadows series!

Francesca don’t let Suzanne lick the book…that’s just gross! Even if I DO agree that Dayne’s chest does look lickable…no one wants a ‘damp book’! AND…what about his name…Dayne…coolest name ever?!? Neither of you mentioned that! His name alone brings visions of…well…you know. Anyway…looking forward to reading it…as well as the others in the Royal House of Shadows series.

OOh, thanks for the review. I love Jessica’s work can’t wait to read this one too

Can’t wait to read this and the rest of the house of shadows series!

Thanks for your views on this book! It sounded very interesting and I plan on reading it sometime!

Thanks for your honest opinions on this book.

The story sounds very interesting.
Thanks!

Oh my! Love that cover! I have been wanting to read this book (new to me author) because of the series. I think it is great that the different authors wrote the series, one book each.

@Shae: Have you ever thought of a book cover?

This author and series are new to me. I look forward to checking them out. 🙂 If I get a book on paperback that has a cover like this I use a book cover or I make sure I buy the ebook for my nook 😉

I love fairytales redone!!! This will be a must by for me 🙂